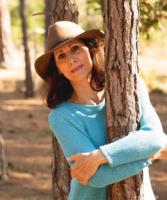 DC Diamondopolous is an award-winning short story and flash fiction writer with hundreds of stories published internationally in print and online magazines, literary journals, and anthologies. DC's stories have appeared in: Progenitor, 34th Parallel, So It Goes: The Literary Journal of the Kurt Vonnegut Museum and Library, Lunch Ticket, and others. DC’s recently released collection Captured Up Close (20th Century Short-Short Stories) has two Pushcart Prize nominated stories and one nominated for Best of the Net Anthology. Her first collection of stories was Stepping Up. She lives on the California coast with her wife and animals. Check out dcdiamondopolous.com. DC recommends Homeless Animal Rescue Team Cambria.

There is a strangeness to it, and I feel an utter distaste, the way the undergarments rustle and swish. Above the dresser is a mirror. I put on the hat and cover my short hair but leave a fringe that falls over my forehead. The mustache, I peel off and put in my pocket.

Billy Luck’s bones rearranged themselves on the bus headed out of Gibsonton for the Tampa train station. He looked out the window, away from his trailer, all rusted, awnin torn, bricks holdin down tarp over a portion of the roof, lookin like other junkyard leftovers from his carnival days.