celebrating "A Brief Conversation with Consciousness" and "Flight Advice: a fabulary" 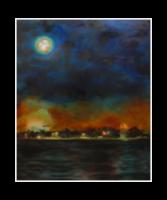 "~getting away with everything" live book release party

"~getting away with everything" virtual book release party 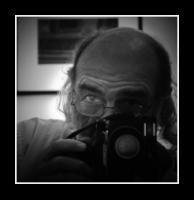 I woke up, from a nap, on a bus I did not remember boarding. It was daylight. My neck was stiff. I looked out the window. The surroundings were unfamiliar. The foliage was unfamiliar, trees and plants I had never seen before. The signs on the shops were in a foreign language.

Why Lundquist Stabbed Me

Was I really going to start worrying about the story I'd made up just to frighten Lundquist? Of course not. Until he'd asked, I hadn't been bothered by the thought of what might be inside the narrow crack in the bottom of the ice cave that we plunged the probe into.

"cooking off the fat," "going," and "forms that perforate routine"

a poisoned napkin come quick from the sea;
a six-shooter with fiery chambers full
to bursting in far and away the most
lethal hurricane season this century;

"Orlando" and "The Wreck"

“Three strikes and you're out,” he says in whispers behind the scenes.
Out on the street, no job, no way home.
Permanent as a bronze statue, ripping young from their loving families;
A sickly angel, hiding among the crowds outside my favorite gay bar.

When he smiled automatically into the mirror, part of his daily, FRUP-mandated routine, he saw there were no teeth at all along his lower jaw. Thatches of dark, scraggly hair had sprouted up in their place.

told them about the fires,
the screams, yelling, flesh,
how the flesh howls for dying even after it’s dead
the trunk decapitated and the howl still standing
in the air

A Ukrainian army combat medic who
was decorating her new apartment in Kyiv
with pink carpets and fluffy curtains,
now sleeps in the basement of
a building converted into the headquarters
​for the Territorial Defense Forces,

"Horror Stories Have No Subtitles" and "Orgasms"

After the missile hits the school the boys stream out laughing. They laugh for no reason. They laugh at the reasons.

When I get frenzied over all the remnants of the laughter, or of someone else’s college plans, I just think: “You could kill them all if you wanted, Caleb. If you decided you wanted them to die, you could find a way and go make it happen.”

Baudelaire and Freud liked to get into the Silver Sands Tavern around six, before all the tickets for Crazy Tuesday Chase the Ace were gone and they missed out on winning the meat-pack.

At root, everything composed remains mineral and chemical. Radical: cut the node at of its conclusions.  The tendrils know dirt.  Yes, I too have known fire. I have seen the helmets cutting the surf, bobbing in the foam and viscera.