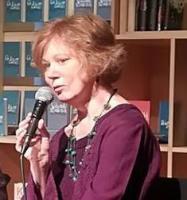 Mónika Mesterházi (born Budapest, 1967) poet, essayist and freelance literary translator has published four books of poetry (1992, 1995, 1999, 2007) and a book of essays (2019) on 20th century and contemporary Hungarian poetry. She has received awards for both her poetry and translations including the prestigious József Attila prize.

Her poems have appeared in Swedish in Två ungerska poeter, (Anna and Per Svenson, 2009). English translations were published in anthologies: In Quest of the Miracle Stag: The Poetry of Hungary Vol. II., ed. by Ádám Makkai (1997); An Island of Sound: Hungarian poetry and fiction before and beyond the Iron Curtain (George Szirtes, 2004); New Order: Hungarian Poets of the Post 1989 generation, ed. by George Szirtes (2010) and in the Hungarian issue of Modern Poetry in Translation (Jim Tucker, 2018).

How much unthinkable evil pushes suddenly in to the
heated rooms. To the rigid impotence of shoulders and neck
there is irritated angry mood in every motion, in this pretty
voiced bird, that can hide under a single green leaf