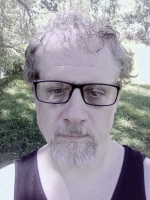 As a child, on interstate trips, Lewis LaCook thought the moon was following his family’s Econoline van. Upon reaching adulthood, he couldn’t tell whether the truth disappointed or relieved him, so he started writing things down. Some of these things looked like poems, and they may have appeared in journals like Lost And Found Times, Whiskey Tit, Lotus-eater, Synchronized Chaos, and Slope, among others. In 2012 BlazeVOX published Beyond the Bother of Sunlight, a book-length collaboration with Sheila E. Murphy; previously, Anabasis published his book-length poem Cling. Lewis can often be found wandering the wilds of Western New York state with his wife Lindsay. Lewis recommends the Pleistocene Park Foundation.