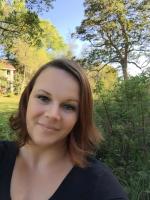 Katie Rendon Kahn is a slam poet from Florida, she writes about obstacles she has personally faced such as death, domestic violence, and sexual assault and well as a variety of political issues. She volunteers teaching creative writing to adults with mental illness as part of an “Arts in Medicine” program she helped found.  Her poems have appeared in Blackwater Review, Broken Publications, Diverse Voices Quarterly, The Barefoot Review, Rising Phoenix Press, and various blogs. Kahn won the Blackwater Review’s Editor’s Prize in 2012 and 2014. She and her 11-year-old daughter have written a children's book series called World Adventures, focusing on the acceptance of other cultures.

"Sex Traffic on Highway 85," "Instructions for Speaking to a Rape Victim," and "An Open Letter to the United Corporations"

Your only options are hear us
​or fear us.