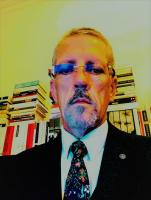 John A Griffin was born and raised in Tipperary, Ireland, and emigrated to the USA in his teens, where he subsequently read for his BA, MFA, MA, and PhD, specializing in German Idealist Philosophy as it laid the groundwork for British Romantic Aesthetics, especially the writings of Samuel Taylor Coleridge, whose proposed though unwritten Opus Maximus was the subject of his thesis. He has published poems & essays in literary journals, and two chapbooks, After Love and Absences ~ A Sequence. He now lives in Riyadh, Saudi Arabia, where he works at King Saud University. John recommends the World Wildlife Fund.

Make a fresco of our blood,
an ocean of our tears,
make mountains of our bones,
and bogs of our bowels,
but who will know death in art,