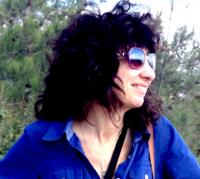 Irina Mashinski was born and raised in Moscow. She graduated from Moscow University, where she studied theory of landscape and completed her PhD in paleoclimatology. In 1991, she emigrated to the United States, where she taught high school mathematics as well as literature, history, and meteorology at several universities. Mashinski is the author The Naked World (MadHat Press, 2022) and of eleven books of poetry and essays in Russian. She is co-editor, with Robert Chandler and Boris Dralyuk, of The Penguin Book of Russian Poetry (Penguin Classics, 2015) and of Cardinal Points, the journal of Brown University’s Slavic Department. Her work has been translated into several languages and has appeared in journals and anthologies both in the US and internationally. Her second English book, Giornata (Červená Barva Press), is forthcoming in the fall of 2022. Website: http://www.irinamashinski.com. Irina recommends Nova Ukraine.

"Still-life with a Sink, a Glass Shelf and a Window," "St. Petersburg Military March," and "Ritual. Before Snow"

Slag heaps lit up
by the streetlamps –
polished up
shame
shining hard,

"Yelahbuga," "On the Fall of the Tyrants," and "New Moon"

Tomorrow Pasternak dies
in Peredelkino, where on his grave
we spent our youth
reciting   "August,"
surrounded by quiet men in dark suits ––
​they almost liked the lines.

"Passaic River in Paterson," "A Sketch," and "To An Atlantis"

It becomes  dark forever at 6.30
as I'm the only one  to get off at my station,
warm train  taking the light away
to stars. In  the west, Passaic
rustles its winter waters in the leafless world
as I walk the resounding mile

And I will also tell you, having grabbed
the silver handle covered by a dozen
glittering fingerprints, and leaning over
(for I am near-sighted)
the Mighty Subway Map,
as if it were a star map - I will tell you: