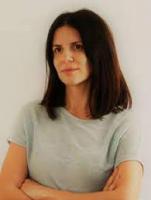 Borbála Kulin was born in 1979 in Budapest. She graduated from the Eötvös Loránd University with a degree in Latin Language and Literature and Hungarian Language and Literature. She inished her PhD in 2015 at the University of Debrecen. She has lived in the United States, in Virginia between 2012 and 2014. She is the editor in chief of A Vörös Postakocsi literary magazine since 2009. She has been publishing poetry and short stories since 2013. Borbála currently lives in Debrecen. She has published two books of essays.

I take pleasure in seeing how cities disappear,
how streets, parks, names get deleted, how
my denial washes even the holiest gardens away.
I mock the mountains: Can you see?
What tiny mounds you all are, if I want you to be so.