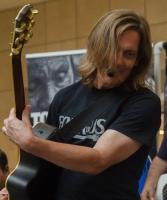 Hailing from California, Bob Ritchie now lives on the lovely island of Puerto Rico, where he discovered, among other things, that wet heat is better than dry. He has a fantastic wife and as many as five kids. He does some editing, some teaching, some translating. Ritchie (as his wife calls him) is a musician who is fortunate enough to have collaborated with Jon Anderson. Bob (as he calls himself) is also a writer of stories. His work has appeared in Unlikely 2.0, Small Print Magazine, Prick of the Spindle, and other forums; two of his stories were nominated for the Pushcart prize. Bob recommends the Children's Literacy Initiative.

His hands had so many bumps and wrinkles that I was reminded of the roots of an ancient tree. But life! The left one flashed up and down the neck of the guitar. Scales. I recognized the pattern his fingers made: e-sharp minor. A theoretical key. One two three four; theoretically.