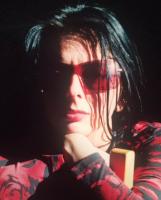 Zsuzsanna Peremartoni currently lives in Budapest. She wrote her first poems at the age of 16. At the age of 23 she lived and worked in Germany as a ceramic assistant. Exhibited in Helsinki, Vienna. Her first volume was published in 2016, followed by four more volumes of poetry. In 2018, she was the producer of a jazz poetry CD release. She has been listed in USA, as a next-generation beat poet since September 2020.

Her own CD was released in February 2021 in memory of Australian poetess Judith Wright. Poems with a didgeridoo accompaniment.

You do not know

Your dream will be short,
like the smile of a pretty girl
which gives a little more hope
​if you can go further.

My present is so fast now
yet it’s constant and timeless.
I’m looking into the mirror,
putting make-up
on my distorted self,

Your trip, your sped up present
escape to a certain future
followed by white lines
road signs, that are not important now