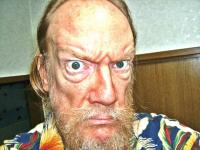 Tom Bradley has published twenty-five volumes of fiction, essays, screenplays and poetry with houses in the USA, England, Canada and Japan. Various of his novels have been nominated for the Editor's Book Award, the New York University Bobst Prize, and the AWP Series. 3:AM Magazine in Paris gave him their Nonfiction Book of the Year Award in 2007 and 2009.

His journalism and criticism have appeared in such publications as Salon.com, and are frequently featured in Arts & Letters Daily. Further curiosity can be satisfied at tombradley.org.

Upon the scrotum's fell evacuation
the musculature normally declines--
or so the common wisdom of our time
lets one (that would be me) anticipate.
But here I feel a pair of muscles thrive
on my castrated travel-partner's sides: