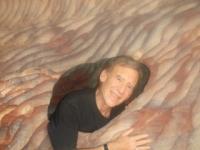 Gerard Sarnat is a retired physician who has built and staffed homeless and prison clinics. He was also a Stanford professor and healthcare CEO. As a writer, he has won First Place in Poetry in the Arts Award, the Dorfman Prize, been nominated several times for Pushcart and Best of the Net Awards, published four collections and appeared in Stanford, Johns Hopkins, Harvard, Pomona, Brown, Columbia, Wesleyan, University of Chicago periodicals as well as in Gargoyle, Main Street Rag, American Journal Poetry, Poetry Quarterly, New Delta Review, Brooklyn Review, LA Review, San Francisco Magazine, and The New York Times. gerardsarnat.com. Gerard recommends The Climate Reality Project.