Debangana Banerjee was born and raised in Santiniketan, West Bengal, India and lived there until she came to Baton Rouge, Louisiana in 2006. Debangana received her master’s degree in fine arts from Visva-Bharati University in Santiniketan in 2005. She received her second Master of Fine Arts in printmaking from Louisiana State University, Baton Rouge in August 2010 and published the chapbook, come back river (Finishing Line Press) in 2014. 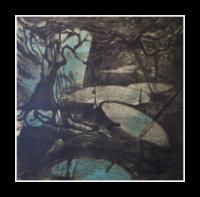 "no one ever asked you," "in the lounge of night," "an absence all yours," and "a voice across the ocean"

no one ever asked you
how does it feel to be submerged
in the affection of an ordinary poet
ignoring the frigid wind, word’s breath draws fervor
your bubbles rising in the water are her answers