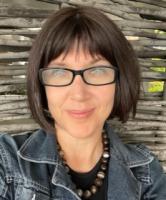 Maria Bloshteyn’s main scholarly interests lie in the field of literary and cultural exchange between Russia and the United States. She is the author of The Making of a Counter-Culture Icon: Henry Miller’s Dostoevsky (University of Toronto Press, 2007), the translator of Alexander Galich’s Dress Rehearsal: A Story in Four Acts and Five Chapters (Slavica, 2009) and Anton Chekhov’s The Prank (NYRB Classics, 2015), and the editor of Russia is Burning: Poems of the Great Patriotic War (Smokestack Books, 2020).  Her translations have appeared in a number of journals and anthologies, including The Penguin Book of Russian Poetry (Penguin Classics, 2015).

"Still-life with a Sink, a Glass Shelf and a Window," "St. Petersburg Military March," and "Ritual. Before Snow"

Slag heaps lit up
by the streetlamps –
polished up
shame
shining hard,