When You Come Again, You Will Never Go 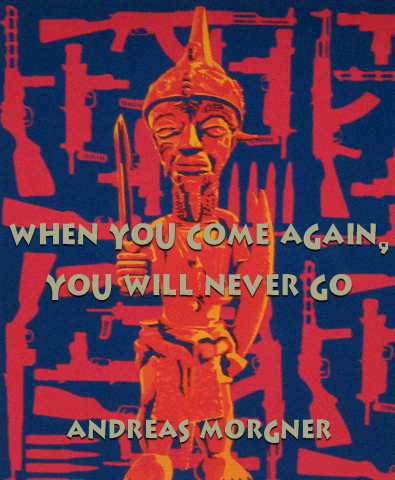 When You Come Again, You Will Never Go was the winner of Unlikely Books' ill-fated attempt at a contest, the First Annual WRITE REAL GOOD Poetry Chapbook Contest. The contest ran through the latter half of 2009, and was judged by Michael Harold, Anne McMillen, and Belinda Subraman, who were assisted by Violetta Tarpinain and Lisa Renée Vincent. It's a long manuscript—its twenty-three poems are detailed and complex—and in the process of forming it into a book, we found it appropriate to include a number of journalistic photographs, especially from Ed Kashi. A new, Second Edition E-book is available from Amazon and Smashwords!

Andreas spent twenty years in the Central Intelligence Agency. In 2001, he decided to seek a more active career path and got a job with the U.S. Department of the Treasury investigating African war crimes as well as drugs and arms smuggling. In 2008, Treasury assigned him to U.S. Africa Command (AFRICOM), a military headquarters based in Stuttgart, Germany. While he spends much of his time at AFRICOM, he travels frequently to Africa as well as back to his home near Washington, D.C.

The emotional intensity of his work, and the distance between his work and the average American's understanding of it, should be clear without any of the feeble descriptions we could offer. Andreas is erudite, intelligent, and passionate, so when he describes these issues, he writes poems. He writes poems that bear little resemblance to the bulk of American contemporary poetry; shocking and disorienting pieces that could never come from lives as comfortable as ours.

When You Come Again, You Will Never Go is exactly what a publisher hopes for when we run a contest. Although talented and clever, Andreas Morgner will never get a Creative Writing job, nor will he sit around literary conferences hoping to find an agent to schmooze. He is an "outsider artist" in a way an "underground writer" can never be; his work gives us a set of experiences and insights that simply can't be found through the poetry world's normal networking structure.

This was a difficult book to publish and a painful book to read. We know that you'll find it as uncomfortable as we do. And we believe that, upon reading it, you'll be as grateful as we are to have shared some of Andreas' discomfort and insight—to experience some of the benefits of his hard-won poetic education.

Maps have no definitions here. Streets are coy that were never named.
The drawbridge built by the colonial British a forever and a half ago is
Stuck and weeps rust into the river. Meanwhile, upstream, trapped
Fishing boats are growing gardens of weeds on their decks. The river
Still flows past the shanties that lean over its banks. It knows how each
Soul finds a place and lives defined by it.

To find the slaughteryard, first take a sniff. When the smell of burning
Rubber wins out over the usual smells of shit and garbage, you're close.
Follow the cars with the bloody trunks towards the river until they stop
In an area surrounded by stalls and carpeted with torn plastic and cardboard
Melting into the mud. Walk past the porters struggling through crowded
Alleyways with the bloody detritus of life-haunches, ribs, even heads.

First thoughts are of hell. Pits of burning, boiling rubber belch liquid
Flames that curl around animal carcasses. Wreathed in sibilant smoke,
Attendants turn the stiff bodies to burn the hair off. Devils tormenting
Damned souls under a black sky. Hundreds work there, anonymous in
Soot, bending and pushing, giving the yard a rippling feel. Only the
Fresh blood plays a shock of bright color on the violated ground.

The princes of the yard are the butchers who move quickly to snip lives.
Their clothes are soaked dark brown from sprayed blood. Steel saws
Necks and limbs twitch as starved hearts search for blood. Bound eyes
Show fearful above submissive necks. Looming over them, deals are
Made and worn money is passed back and forth while all wait for the
Busy, busy knives.

The tribal elders say that the forest surrounding the town
Has long been known to harbor devils. They hide in the trees
With their witchguns firing misfortune on the tribe taking one
Child in three before age six. Great care must be is taken passing
The edge of the forest. Adults do not utter each others' names
Near the trees for fear the spirits would find them in their beds.
Children learn early never to show their back to the trees or the
Demons will hurl themselves into dreams bringing madness.

Some seek appeasement with bloody sacrifices left at the foot
Of ancient trees whose roots are highways to the sun from the
Underworld. When the demons' demands become too much,
The village sends its own evil into the woods. Bush devils.
Possessed hunters wielding their own dark magic. A powerful
Antidote that could easily turn on those they mean to protect.
Dressed in mottled strips of fur, vines, and masks of fangs and
Horns, they growl throughout the night among the trees clawing
At any animal hole pursuing spirits lurking just under the surface.

While villagers hide behind shuttered windows and barred doors,
The bush devils begin to scream. An evil spirit has been cornered.
The sound of running feet and breaking branches grows as the
Screams turn to baying. The noise of a great struggle. Bodies slap
Against trunks and dirt. More screams. Finally, a great horn
Sounds piercing the forest, marking the devil's agony of defeat
And expulsion. It is snatched away quickly. Falling, falling into the
Earth until passing from hearing. Finally, silence. For now.

What people are saying about When You Come Again, You Will Never Go:

"I am listening to your work on your publisher's site as I write this and I am deeply moved by it. Not just by the subject matter, but by the compassion that would move you to attempt to articulate your relationship to it with such a transformative lens and tongue."
—Chris Abani, Guggenheim Fellow in Fiction and author of Sanctificum

"Forget TV, America. It's time to visit other countries. For the wars we don't see may be the ones we condone. And the ones we condone might just be the ones we inhabit.
"Stop for lunch in Sierra Leone, a Congo-side jungle tour and hospital visit, the heart's last go-round in Mozambique: Andreas Morgner knows all the right sights to immerse us in, climax after bloody climax."
—Amy King, author of Kiss Me With the Mouth of Your Country and I'm the Man Who Loves You

"It's very difficult, today, to write poetry about war. The horrors of the visual media make any literary form seem almost too pretty. And yet Andreas Morgner manages to capture the cruelty of continuing warfare in Africa without sentimentality, while reflecting on the complicit support and encouragement of conflict by the arms trade. His poems reveal not only the violence, but also the everyday banality of horror ever present on this besieged continent."
—Anton Krueger, author of Chatter

"Andreas Morgner's When You Come Again, You Will Never Go is hauntingly true to the images of our new, scarred world of endless gunfire, a telling without which the survivor's tale would be otherwise lost. This is my story, your story, our story. When you read these poems, they will never leave you. They will break your heart over and over with fire and smoke, the dead and the dying coming alive. Here, poetic lines stand between the gunfire and the victim of gunfire. But these poems span an entire world, an entire continent where pain is for both the victim and the tale bearer. Andreas sees a world through the lenses of an outsider, becoming an insider. This is a necessary voice where survival is not only about the survivor."
—Patricia Jabbeh Wesley, author of The River is Rising

"Andreas Morgner is an American who has visited African countries and worked with its people over many years. His engagement with the lives and suffering of African peoples, his compassion and deep concern to record something of what he knows is evident in every poem. This slim volume of compelling, moving and sometimes shocking poems shows us something of the multiple tragedies of the African continent and the spirit of its peoples. The stark honesty and vivid detail of Andreas Morgner's accounts are like the lens of a documentary film camera bringing human experience into sharp focus.
"He takes us into a frightened village, to scenes of atrocities, to witness the abuse and hopelessness of exploited laborers in a gold mine, to a court trying crimes of genocide, to the hell-like scene in a slaughter house, on a helicopter gunship mission, to a hospital where bodies pile up faster than they can be buried and to Somalia where the distress of thousands of women mourning their dead is contrasted with the loving care lavished on their guns by men and boys. There are positive events and hope, too. In Bukavu a child survives malnutrition and dysentery in a hospital where all are working until they are exhausted; education promises a new beginning; the blessing of a strange singer brings comfort to an anxious relief convoy in Sudan; and the birth of Andreas's granddaughter in Mozambique is a cause for celebration.
"Africa exists as a great vacancy in the consciousness of western people (and doubtless much of the rest of the world). Yet so many of Africa's troubles have come from beyond its shores. And some of the hope for a better future may come from the same direction. Africa needs its poets. Andreas Morgner may do more with this collection of poems than any number of official reports or learned studies to connect with ordinary people and shine a little light on the darkness of Africa."
—David Roberts, editor of The War Poetry Web Site

"If poetry is food for the soul, Andreas Morgner's accounts of true events are a banquet of pain, hope, joy and despair. Described in this book is real life; the gritty and bloody violent occurrences that happen in our world every single day. For any reader curled up safe in their home, Andreas' poems will take you to places you've never seen—where you can touch, smell and feel each graphic description.
Andreas has witnessed devastating poverty, conflict and struggles. He describes this collection as, 'other people's stories'. True accounts, all told in a exceptionally talented voice."
—Diane Hall, author of Son of the Ringmaster