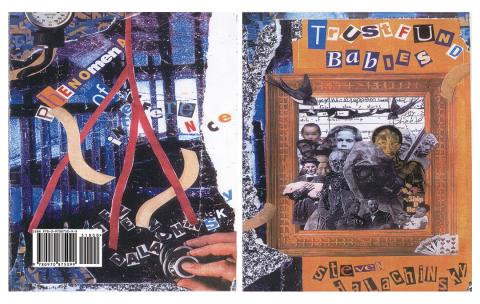 In 2012, Unlikely Books published two chapbooks by Steve Dalachinsky, Trust Fund Babies and Phenomena of Interference, together in one inexpensive tome.

From Phenomena of Interference:

i wish my brother were here
so i could tell him this
maybe he'd pat me on the back
thru the phone
& say it's ok steven  –
i'll send ya a million thru the mail.

i know what white america thinks of other-colors america

members of my own lost tribe
wandering the terminals
not so much lost anymore   but in search of......
pursuing the promised land right to the very gates of paradise   it/self
or was that PARIS ite
i have so much fear inside me          so much prejudice
i only wish to banish them to exile   or a flight all their own
only who cares where they land this time?

Or consider the introduction by Jonathan Penton:

I was a young bookstore employee when professional basketball player Dennis Rodman released his autobiography, Bad As I Wanna Be. Upon opening it, I discovered the literary conceits expressing the transgressiveness of the title: not only did the opening passage describe a suicide attempt, but it was written in a scattershot variety of typefaces and sizes. Immediately awed, I took the book to my manager, who made an exasperated noise and proceeded to tell me what a bad person Rodman is and how gruesomely tacky those type changes were.

Bad As I Wanna Be isn't nearly as insightful as the book you hold now. But it, and this tome, share a sense of complete freedom. Rodman found freedom in the admission of psychosis: stuff that's now very familiar, and thus often (and wrongly) maligned, in poetry. He found freedom in wild and divergent layouts, something that's not so much maligned as aggressively and deliberately forgotten by publishers and poets without the nerve to try it. It's the same sort of freedom that Kerouac showed us in On the Road, which became an American classic for neither its plot nor its characters, but its audacity. We read On the Road now because audacity, of all the literary tropes, is the most exhilarating, and therefore the most consistently life-affirming. In short, if it's OK to write stream-of-conscious randomness about a car trip or describe your suicide attempt or scattershoot your poems over the page while working in a crazy typeface, it must be OK to do anything.

And when it is OK to do anything, well, life is just better.

Don't believe me? Take a look at Steve Dalachinsky, and this book he's designed. The anarchic nature of the layout will strike you immediately, if it hasn't already. Should you begin on this side of the book, you'll be confronted with the line

i know what white america thinks of other-colors America

and slammed rapidly into a whirlwind of form, graphic, style, and typeface, a dizzying diversity designed to support a mad mobile of thoughts and themes. Trust Fund Babiesstarts and ends with the satirical look at American wealth implied by the title, but somewhere in its sizable middle it covers sex, art, violence, discovery and self-discovery, chunks of European history, and its recurring questioning claim

And checking out Phenomena of Interference, you'll find an even broader palate of literary styles and visual imaginings, supporting subtle analyses of the relationships between humans, their environment, and their selves—all meticulously framed in a world of spirituality and dream.

Phenomena of Interference was initially a spoken-word album created in partnership with jazz musician Matthew Shipp, and like everything Steve writes, it's designed, and perpetually adapted, to work on a variety of stages as it stretches out over any available page. This book, although much of it was published in different forms several years before this edition, is always ready for re-exploration, even though Steve has now moved onto other projects, such as his anti-opera with The Snobs. And thus we learn two things about the nature of Steve's lawless craft.

First, to be this free takes enormous commitment to the continual development of skill. In this era of factory-produced, increasingly left-margin-hugging poetry, younger students are encouraged to view wild formatting as gimmicky. This is wrong. Each time the poet adds a new technique to their technical repertoire, they must consider how that new technique serves their thematic explorations. There is nothing random in Steve's formatting, nor his choices of typeface, nor his irregular meter or emphases. It represents decades of constant polish—the artist moving ever-closer to the pinnacle of his craft.

Second, the freedom saturating Steve's poetry, art, and music is joyful, and like all joy, it is interactive. Steve's work, with its verbal, aural, and visual collage, draws you in and asks you to participate in a way that most contemporary poetry books do not. I'm told that all books have a need to be read. That might or might not be true, but not all books want to be read; some of them would rather clearly prefer the reader sod right off, thank you very much. This book wants you to be involved with it. It wants to talk to you. It wants to sing to you. But it also, through both form and content, invites you to talk back.

I find that this book offers me an essential item missing in so many books: an invitation, from the poet, for the reader to treat him as a confidant, correspondent, and peer. The confrontational language emphasizes that all literature is meant to be part of a dialogue, and not the cloying dialogue of Amazon.com criticism, but the beery, happy argument of those who love literature, as they love music, as they love dancing, as they love every form of art. In this book, as with so much of Steve's work, you'll find a reminder of the poet as troubadour, and the troubadour as everyone's inherent friend.