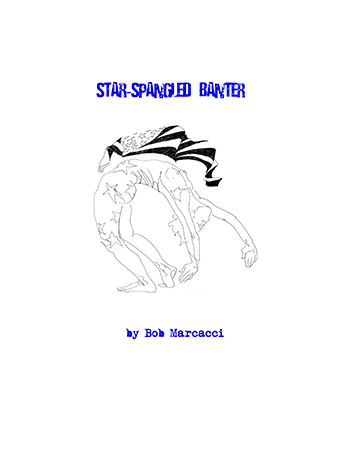 Unlikely Books is proud to present Star-Spangled Banter, by Bob Marcacci, as our newest poetry chapbook, with cover art by Nancy Victoria Davis originally found at Unlikely's July 4th issue. Star-Spangled Banter is an extroverted passage into the psychological and spirtual American Self; a discussion of boredom, lust, greed, fury, self-righteousness, and other peaceful motives in wartime. Laid out in a wild, spiraling projective verse, Star-Spangled Banter is a controlled and organized wail, a study of the agony of the destructive nature in every nation's soul.

american said he was something more

Star-Spangled Banter is no longer for sale, but you can download it free!