Soy solo palabras but wish to be a city 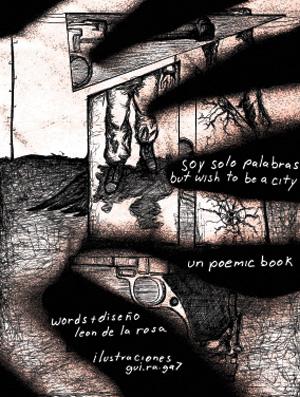 Buy the paperback on Amazon.com
or the e-book from the Kindle Store or Smashwords!

The Second Edition of Soy solo palabras but wish to be a city is HERE! It contains the full, unaltered content of the 2010 edition. It was re-released on September 16th (Independence Day), 2016. To celebrate, the author read the entire book live on our YouTube channel. Take an hour and check it out, a full and fully-illustrated reading of the book:

Soy solo palabras but wish to be a city is a graphic longpoem, beautifully illustrated in comic-book style by Gui.ra.ga7, sharing an adventure in hope for León De la Rosa's city, Juárez, Chihuahua, Mexico. Check out this reading with the author at the 2010 Conference of the Association of Writers and Writers' Programs in Denver:

Behold the introduction by Donna Snyder:

León De la Rosa is the quintessential fronterizo, blending and describing his life on either side of the Mexico/U.S. border in multiple art forms in multiple languages. And when the blend is less than seamless, he limns the mismatched fragments of life with a kryptonite gold leaf and makes you call it beauty.

A fronterizo is someone of and from the frontera, the border. León grew up and attended school on both sides of the Juárez/El Paso urban area—an area of some two-plus million people crowded on each side of the twice-named Río Bravo/Río Grande, on either end of a short walk across a bridge, rendering such things as political boundaries superfluous. He also breaks and reconfigures the lines between his total fluency in both Spanish and English, both visual art and literary art, both written and spoken word.

León is a highly educated and sophisticated reader of world literature, yet is always in the vanguard, pushing and breaching every boundary he confronts. His performances combine aspects of spoken word, installation art and "videopoemas," often collaborating with videojockeys who are "spinning" and manipulating both digital and three-dimensional images. Sometimes images are projected behind or on his own body as he performs his rants and poems. The visual and verbal aspects fluently transition back and forth among the media: text, video, images, performance.

León, with a masters in multidisciplinary studies from the University of Texas at El Paso, lectures in art at the Universidád Autonomo de Juárez. Along with his illustrator, Gui.ra.ga7, he curates The Gun Gallery in Juárez and performs regularly both there and in El Paso. He is the product of academic and intellectual approaches to the literary and visual arts, yet his spoken word performances reflect his long time dominance of the El Paso/Juárez slam poetry scene. His performance at the 2010 Conference of the Association of Writers and Writers' Programs in Denver blew the roof off the joint, blasting the international audience into the stratosphere, educating them on the realities of life in EP/Jz, triggering their stereotypes and then exploding them, one after another, like verbal Molotov cocktails. León has effectively transcended the limits of what is fine art and what is street art, and he has not bothered to ask for permission.

Those audiences lucky enough to hear him live experience a sonic barrage in three languages: Spanish, English and code-switching Espanglish, soon to be the pan-cultural demotic of modern society. Although he is an academic, I don't think the writers and intellectuals in León's audiences see him as an artist of the academy. I think they see a bad, bad Mexican boy, with a black leather jacket and unmitigated rage, who lives daily in a city that is currently known as the murder capital of the world, with its years of mass murders and assassinations, in both the drug wars and the grisly serial murders of women and girls.

León grinds our faces into the grime of the squalid poverty stemming, as always, in grotesque injustices and gross disparities in access to common necessities, the things that make life livable and worth living: food, sanitation, health, homes, education, jobs, the arts. Leon has to traverse a harsh and mortally dangerous terrain every day, where safety and peace are vague memories of a less dystopic reality.

This is a very particular time, the beginning of the 21st Century, and León is from a very particular place. There is despair and anger enough now to fill our prisons as fast as the two states of Texas and Chihuahua can build them. León's ability to express this catastrophic destruction and despair in such compelling form makes him a rare individual. He is a gifted citizen of the new 21st Century world, flourishing and wielding every tool at his disposal to translate that world into intelligible meaning.

The last few decades have seen an upsurge of interest in the use of graphic books. Originating in the action comics of the 20th Century, this art form has begun to dominate our films and our popular culture. The illustrations of R. Crumb's stories, originating in the underground comics of the nineteen sixties and seventies, are now seen regularly in New Yorker magazine. Hollywood's attempts to make movies from Alan Moore's spectacular graphic novels have generated massive aesthetic and moral controversy while greatly popularizing the art form. But León is one of a small handful who has claimed this format for poetry.

León's work is political in every way. For a boy growing up in the world of daily mass murders and haunting femicides, a region of people starving and dying from lack of potable water and access to health care, the very act of giving voice is a political act. As a man, his poetry internalizes all these complexities: lingual, political, and artistic, and creates one powerful whole. León wanted to be a city and maybe he's only a word, as the title of his book suggests. But his sphere is the transnational, multilingual, multicultural 21st Century and he knows how to speak the language. There is no one better to show the world how it's supposed to be done.