_a ship on the line 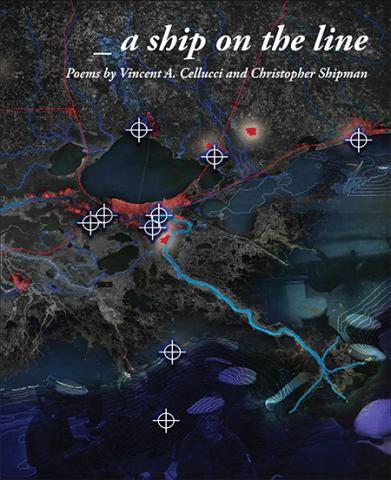 _a ship on the line was named a finalist for the Eric Hoffer Book Award!

_a ship on the line is a book of battleship verse-charges to determine the depth of technology’s effects on the personal and the poetic. The pair hold the line of the poem and dare updating naval warfare's final goal to syncing.

Check out what people are saying about _a ship on the line:

"For a 'myth of sun and wanderlust,' A Ship on the Line spends a lot of time underwater and at home. But for all the physical distance they don't cover, Cellucci and Shipman are pretty much the De Soto and La Salle of memory and imagination, rediscovering New Orleans via meditations on Katrina, D-Day Normandy, friendship, parenthood, etc. And they seem to recommend, to the residents of a city so hyper-aware of its own inevitable submergence, a similar exploration of their own mythologized past: 'fill your lungs with water / and swim to wherever / you never came from.' What they are offering—to their fellow citizens and to their readers—is both a fatal resignation and a reconciliation, a 'euphoria, even if it's / the last breath uttered / while drowning.'"
—Chris Tonelli

"You'd do worse than to take your angst and vices to the firm of Shipman & Cellucci: they are some of the finest codependents you'll ever hope to disable you."
—Andrei Codrescu

"A Ship on the Line by Vincent Cellucci and Christopher Shipman captures what collaborative poems should: a repertoire between two poets that circles around familiarity but creates a strange new terrain that unfolds within the writing process. From the river to the game of Battleship to the idea of technology, somehow creating a synchronicity in the line itself, these images echo deeper themes of loss and a struggle to make sense of one's history in the face of what seems a world bent on destruction: 'while the men who end / the world / carry on ending it / at unprecedented speeds' Shipman and Cellucci 'sing with shivering mouths' and the lines they float 'hide love / & hit' their mark."
—Megan Burns

And consider the introduction by the editor, Michelle Greenblatt:

When I first opened the manuscript for A Ship on the Line, I was unfamiliar with the names Christopher Shipman and Vincent A. Cellucci. Their addresses—Cellucci in Baton Rouge, Louisiana and Shipman in New Orleans—were printed on the front page, along with the maritime title, but gave me little idea what to expect. I did not know the book's history: how it was written by two close friends as they would play their favorite game, Battleship, at Cellucci's home near the Mississippi River.

Reading the poems, I immediately fell into an old-school, nautical world deftly fused with the symbols of modern technology. I found a unique universe which was not only relatable, but a pleasure to enter and to immerse myself in. The poems in A Ship on the Line do not admit easy phrasings: they are assembled word by word, each chosen with a sense of pace and informed deliberation: "What warm blood you must have/ says the cold current rushing by// says the sea in its throat// says/ my daydreams// bubbling above water." Succinct and astonishingly beautiful, these pieces stretch the boundaries of language and literary form while juxtaposing classical and modern imagery: "double-oared galley/ bow ram headed straight for you/ sheer shout-out/ synced my battle/ overboard/ in the bar." With an ambition reminiscent of Charles Olson, A Ship on the Line proves the durability and flexibility of lyrical poetry.

Part of what makes this book so good and so compulsively readable is the way the authors refract language to the point of elemental gesture. Calling upon images of ocean, death, and the deeply personal and infusing these themes with modern technology, Shipman and Cellucci's poems do not demand the willing suspension of disbelief—they demand belief, and it is a measure of their tremendous success that they consistently succeed in achieving this. A Ship on the Line's lyrics are mournful, powerful and drenched in memory. Its language is sensuous and cutting; its poems prismatic, skillfully layered, and intense: —their gravitas is instantly compelling. I followed the track of their lines with heightened attention, eager for the next twist of language and story, anticipating the surprises that awaited me.

A taut narrative scaffolding supports Shipman and Cellucci's searing meditations on friendship ("prove rivers/ repel/ prolong/ battlesynch/ righting a friend/ a wrong"), vengeance ("fight for the whitecaps/ sink to sync/ simplicity and sweat/ fuel our exceptional sails/ sailing shoreless shelter/ avenging all vessels"), isolation ("fill your lungs with water/ and swim to wherever/ you never came from"), and the twin intensities of loss and love: "I'm so dirty I breathed/ underwater three years/ to remember you for 3,000/ I tied a delta to my ankle/ and sank/ the alphabet of your memory". Skillfully depicted imagery ("somewhere someone hangs/ a hat on a hook/ over a slicker/ that sways/ (waiting)/ like its captain's/ only ghost". A Ship on the Lineexplores abstraction ("I have no idea where I am/ as if I remember// this is every word I've ever said") with brilliant metaphor ("this is as close as you can get/ to the river/ without jumping off a bridge").

Herein you'll find many of the techniques of the Language poets, but infused with an ecstaticism that reminds one of joyful experimentalists like Vernon Frazer or Kim Addonizio: "splinters social/ into an artificial reef/ that leaks/ and leaks/ drowning the keyboard/ knowledge of grammar/ and vocabulary…" The poems, while introspective, speak of the world, and the reader develops a deep connection with both the sensibility and the mystery behind them. Like the best works of Ira Cohen, these poems use the personal, political, and technological as intertwined metaphor: "sitting on the O/ sacrificing the old/ for new goddesses/ syncing/ lovelihoods." Shipman and Cellucci deftly nurture the energies of hope and despair, pleasure and grief and bring them fully formed to the page: "fill my absence/ with your absence like sun// and I'll moon// the barge bulging by." They do not only explore the hidden places, they discover and invent them "a darkness held dear open to absorb sunken ships/ sparks fly as we weld a mission unseen/ by the likes of dormant daylight or glacial night/ although I'd delete any ending to sail again."

A book like A Ship on the Line is not just a monument, it's a mirror: it reflects the narrative of not only contemporary poetic culture, but also a poetic narrative of the Mississippi. By reaching back into the nautical past and drawing from the technological present, this manuscript describes in vivid detail a haunting and deeply personal glimpse of a landscape that, in so many ways, helps to define a continent. Alternatively comforting and terrifying, elusive and intimate, A Ship blends lilting cadence and vivid imagery with powerful metaphors and musicality. Shipman and Cellucci's writing dazzles with invention and enlightens with skilled description and soulful storytelling.