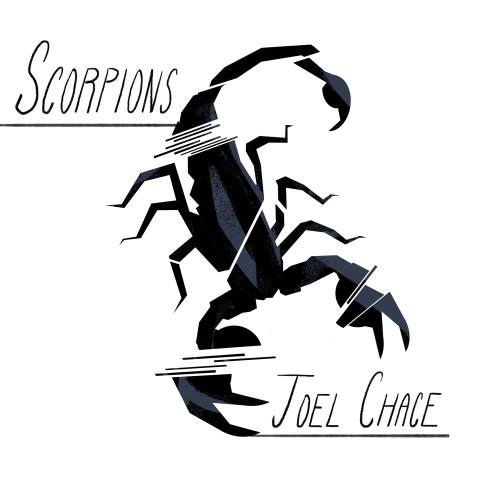 Unlikely Books is delighted to release Scorpions, a chapbook of thirty-nine short poems by poetic grandmaster Joel Chace. Scorpions, the last manuscript selected by our late Poetry Editor, Michelle Greenblatt, is a fascinating intermingling of archaic structures and modern language; an extended sting into a timeless void.

Check out what people are saying about Scorpions:

There are moments of 17th Century diction in these poems – “'Twould have engaged my heart” – which mix with the contemporary demotic – “Slip into your pj's”. This picante blending presents a discourse – the poems are structured to tell a story or explain something – which is elliptical, and thus the meaningful and emotive sense of them is considerably enriched. In fact, the “poetry”, or beauty, of these works resides in those empty spaces, which are not empty at all, but filled with the possibilities that make them worth reading repeatedly.
–John M. Bennett

Vowel sounds are wow sounds. Crafted pieces transport the reader from instinct to realization. Chace fastens on accumulated sensory affliction toward affection pointed where it goes. Enveloping the whole of thought without the ought toward clear perception. Highly specific regions of perceptual stings collate into safer fabric. Mesh, viable and retro piece that stirs the soul. Read Joel.
–Sheila E. Murphy