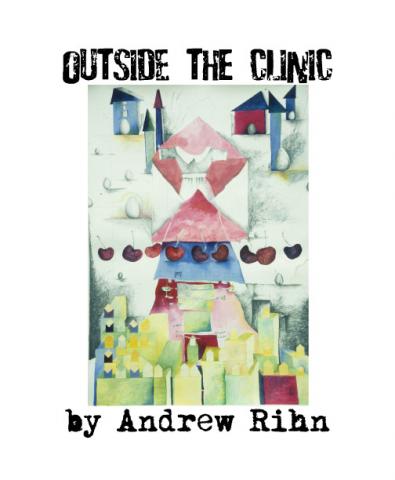 Unfortunately, Outside the Clinic is no longer available.

In 2009, we of Unlikely ran The First Annual WRITE REAL GOOD Poetry Chapbook Contest, judged by Michael Harold, Anne McMillen, and Belinda Subraman. Outside the Clinic was the second-place entrant, "losing" by a fraction of a point. Although we didn't have the budget to declare two winners, we knew that we couldn't let this outstanding manuscript go unread, and were delighted when Andrew Rihn agreed to let us to run it as an e-book. Sculptor and painter Carey McDougall created original cover art for the volume.

shouts at women whose minds
are already made up.
In this parking lot, his barking
finds no empty spaces;
the time for decision making
has passed. He has no part
in that process, no scales
for the weight within these women.
The kind of guy you could see
ordering a mail-order bride
and imagine her asking for a divorce.
He is propaganda from head
to toe: thick military-style
boots, cargo pockets stuffed
with pamphlets, red vest
tied around his wide
stomach with the words
Please Talk To Me
and a picture of the cross.
His eyes see past boyfriends'
confusion, past the women's
puffy eyes. Does he look for
scruffy, unkempt fantasies
of the Old Testament?
He says he is offering
an alternative, that he knows
organizations that will
help with the cost
of raising her child.
He thinks that if the price
is right, these women
will speak with him,
whisper his name gently, say
thank you or this means
so much, and look up at him,
not with tears of anger
or fear, but of gratitude,
thinks the voices of the little
ones he saves will one day grow loud
enough to drown out the silence
of children who never call anymore,
not even on his birthday.

At the age of twenty,
and on the eve of
my leaving for ten days in Memphis
with a girlfriend,
my father tells me simply:

What people are saying about Outside the Clinic:

"One of the best books of political poetry I've read in ages, Outside the Clinic takes a profound look at the abortion question. It is an insightful and intelligent collection, which dares to examine the fertility issue from a responsible, male perspective. If only the world could look through Andrew Rihn's eyes, there would be less need for shrinks and anti-depressants. The book speaks truth. What more can I ask for?"
—Nin Andrews, author of Midlife Crisis with Dick and Jane

"The American debate about abortion and contraception is too often conducted with shouting, anger and violence. Outside the Clinic is a powerful and unflinching look at these issues and those who stand on either side. It reveals everyday truths that are often drowned out by the politicization of abortion. It looks beyond the commotion and into the heart."
—Kellie Copeland, Executive Director of NARAL Pro-Choice Ohio

"Andrew Rihn has written a smart, well-constructed, politically incisive collection of poems. Their various formal approaches and range of speakers represent the a complete engagement of the poet in the fraught and dangerous environment in which reproductive health workers function."
—Kazim Ali, author of Bright Felon: Autobiography and Cities

"In Outside the Clinic, Andrew Rihn explores the hypocrisy and dangerous zeal of the religious right which threatens us all. This strong collection of poems is vital in its reclamation of language and its insistence on sanity and justice at a time when it is increasingly rare."
—Al Markowitz, editor of The Blue Collar Review

"Aware that the objectification of women is historically steeped in legislated (and otherwise) control over the female body, Andrew Rihn addresses women's reproductive rights and the murder of Dr. George Tiller in these surprising poems that take their place on the side of indignation over injustice and the assertion that in America women's rights are also human rights."
—Leigh Herrick, author of Just War