My Hands Were Clean 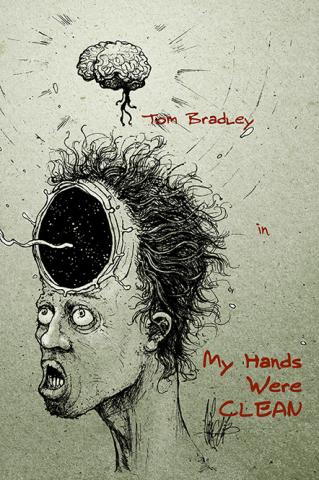 The Second Edition of My Hands Were Clean has arrived! It includes the full text of Tom Bradley's original drug-fueled sex-cult rejections, along with a new preface that includes the latest hip term for MDMA. Buy it on Bookshop.org or Amazon.com!

I salute any reader brave enough to take it on. Quoting from the opening pages: "The eating of some medium-strength acid might be in order."
—Joni Rogers, author of Bald in the Land of Big Hair

"One of the hallmarks of [Tom Bradley's] work is a mania that reads as ecstasy. My Hands Were Clean is a joy to read because the author and narrator seem caught up in a mad enthusiasm, an insatiable glee, an absolute pleasure in the written word. The final pages reinforce this impression, tying [Bradley's] decision to write, while being paid to do otherwise, into [his] narrative style... The plot, based as it is in LSD, is connected to—perhaps even derived from—that maniacal ecstasy. It’s not an expose on how Mormon sex cults are dangerous; it’s a novel, of undetermined factuality, on how Mormon sex cults are hilarious."
—Jonathan Penton, Unlikely Books

My Hands Were Clean tells Tom Bradley's teenaged story of working as a musician for pseudo-Mormon polygamists who conducted Alister Crowley-style sex magick rituals under their place of business. The new edition features cover art by Nick Patterson. Check out the book's opening passage:

At the authentically rustic Telestial Spaw [sic], we humble paid-under-the-table employees are gearing up for the evening shift: rolling up sleeves, squinching ring-shaped muscles, and so forth.

Yonder in the celestial vault, through the gathering gloom, certain scrawny stars are elbowing dowdy planets. I'm no expert, but if I squint my eyes, this conjunction, or whatever it's called, appears almost significant enough to warrant a special observation here below. The eating of some medium-strength acid might be in order.

And can you guess who just happens to be pinching, between left thumb and forefinger, a dandy blotter? It features a phosphorescent chartreuse goat with tangerine granny teats, rendered in surprising graphic detail for a consumer item so inexpensively mass-produced. You can even see exquisite areolae orbiting the gravitated nipples. That's quality craftsmanship. I am proud to have bought American.

Slipping a tiny piece of paper into one's mouth is an inconspicuous act, and can be encompassed under the guise of picking one's nose (acceptable behavior here at the Telestial Spaw, for employees as well as guests). The pinkie distracts attention by spelunking the nostril, just long enough for the corresponding thumb to prestidigitate between the lips and deposit the payload, which has been pre-inserted under the nail. Slick, literally, as snot.

But I've never felt fair abusing controlled substances in the Telestial Spaw Pioneer-Style Steam Buffet where I am enslaved. The Mormon diners flinch so guiltily over their tepid saucers of Sanka. After all, Our Heavenly Father's original proscription, as revealed to the Prophet-Seer-Revelator in Doctrine and Covenants, was not against caffeine per se, but hot drinks. This entire tourist trap is a whole-body hot drink. Hence the misspelt name. Who am I to compound the turpitude among the trenchers?

On the other hand, something tells me I must not wax entheogenic under the open sky this evening, not with one of those horoscopical thingies topside. It's the summer of my penultimate year in high school, and, being so endearingly young, I still lean toward the timorous end of the behavioral spectrum.

Judging from the furtive behavior of Mr. Glasscock, my boss, and his "senior employees" (read plural wives plus sundry old acolyte-flunkies), tonight's astrology must be inauspicious in some fucked way. The celebration of events from which wholesome people flinch is a characteristic of these quasi-Kabbalistic spermo-gnostic Tantric types, who make a point of savoring the End Times, or Latter Days, as they're known among the locals.

Being genetically fifty-percent "local" myself, I, too, am burdened by this tendency toward ritualism. I can't resist the innate urge to Eucharize, considering what strange spiritualities might be the neurochemical effect of the substance which my thankful head is about to receive. I need to collate the paper in my mouth with certain gyrations. And, in that context, it's always best to remember the exhortation of our Real Boss, the Big Mr. Glasscock in the Sky, who, long ago, opened his reverend mouth and taught the multitudes, saying—

When thou prayest, enter into thy closet.
And when thou hast shut the door,
pray to thy Father, which is in secret,
and thy Father which seeth in secret
shall reward thee openly.

So I need to take my act indoors. If not the chow hall, what is the obvious choice—because it is the only choice in this institution of exactly two structures, not counting subterranean steam and cream chambers and their locker room annexes? (The latter are beyond consideration; unlike Mr. Glasscock, I'd rather not be surrounded by naked, sweaty bodies at the delicate psychospiritual moment when that blotter goat succumbs to the enzymes in my saliva.)

Where's the best and only indoor place to perform the pre-evening-shift sacrament? Why, Shitland Pony Hell, of course. That's what we vulgar proles have nicknamed the Telestial Spaw Righteous Wrangler Riding Stable. It's home to a string of odd-toed ungulates whose wretched karma is to crack vertebrae under the anuses of city slickers from down in the valley. The tin-horn dudes among our clientele like to do a little pretend horseback riding before boiling their bodies in the fluid discharge of our salt and tar desert.

Yes, that's right: salt and tar. Plenty of sulphur and radium, too. My place of employment is damned deep in the sort of godforsaken wilderness about which the prophet Isaiah, hewn in twain by a wooden saw for his efforts, warned us all—

...where demons and monsters shall meet,
and the Hairy Ones shall cry out one to another!

At such an early stage in my half of this flip book, I'm unwilling to commit myself with regard to demons and monsters. But nowhere will you find greater numbers of Hairy Ones than in Shitland Pony Hell. It's out back behind the restaurant, tucked among the fumaroles, solfataras, mini-geysers, mud pots and other sorts of volcanic razzmatazz that have turned these few acres into something more than just another expanse of extreme occidental zilch. Yellowstone on Quaaludes.

The Telestial Spaw Righteous Wrangler Riding Stable's ass-end has been wedged and tacked against an arc of the largest geothermal formation. Shaped, colored and even textured exactly like the lid of a colossal human skull, dominating the otherwise featureless landscape for miles around, this half-buried gargantuan noggin is our trademark. In a similar way another skullish outcrop advertized Golgotha.

Our giant cranium is composed of a precipitate stone which geologists from the local land grant college have designated travertine. It's the very material Nero caused to be quarried in grotesque quantities when he felt the whim to corrupt Rome with a similar den of crowded, diseased, smelly social resort. Up from deep within oozes our colossal Spaw Gawd's hot spinal fluid, our saleable commodity, whose ostensible salubriousness has prompted four generations of entrepreneurs to chase away the Uncompahgre aboriginals and charge admission to everyone else.

Buy it on Bookshop.org or Amazon.com!