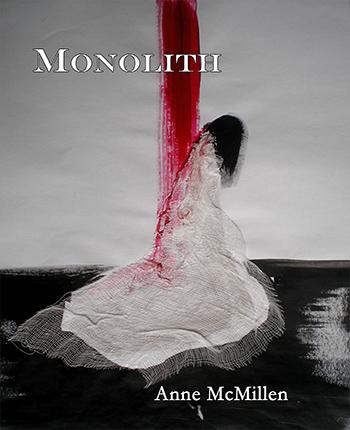 Buy it on Amazon

Originally published by Unlikely Books in 2010, Monolith is back in 2017, with a new layout and an updated introduction by the editor, Jonathan Penton.

Check out this reading, by the author, in 2010, at an off-site event at the Conference of the Association of Writers and Writing Programs:

it was what it was,
turned off by the
hostility hosting me.  ’til
tenderness of thought
became involved.

look me in the eyes
i’ll never get high again

and i hope you know
i am so fucking lying to you right now...
and when i’m thrown back into the past by some belligerent’s rant
i’ll always remember that
at the least
that fraudulent bushwacked alcoholic
never even tried
to kid me about us having a future together so
please spare us both
from all that soul-mates bullshit
because we both know
it will be a fucking miracle
if we are                    drinking buddies
two years from now.

mark the neck, water line. going slow erosion with thin lips suction.
broken blood vessels traceable as track marks and i think
i just might be drowning in air.

rehabilitate my own
artificially. nothing but a white trash
trash can
for all of society’s dirty laundry. believe it
if you can believe me
in a man’s world

i’d rather be a fag too
than a woman
any day.

reality: strongly strung out, stranded in memphis
where the shadow of gallows marked
meetings of streets...
after being stuck in west texas,
a cactus in a blizzard

happiness is not the only valid reason to live
or love.
what we felt for a fleeting moment

Or consider the introduction to the 2017 Edition by Jonathan Penton:

Seven years ago, in the 2010 Introduction of this volume (beginning on page ix), I described Anne McMillen, along with her home town of Elyria, Ohio, as a “canary in a coal mine.” I said that the state of the American Rust Belt, and the poetry that Annie wrote about it, reflected the decay that was present in America and would soon engulf the nation.

This was not a difficult prediction, and we are not surprised to find it fulfilled. The collapse of American society is almost complete, as seemed inevitable in 2010. I did not predict that social media would so quickly replace the traditional Web, and the negative effect that would have on American literature and the American small press. Seven years ago, anyone with a passion for literature could create a literary web site, attract writers, and develop a fan base. Although this is still possible, and still happens, it happens on a smaller scale, as even the literati loses its attention span, preferring “novels” that can be digested 140 characters at a time.

We’ve lost some great writers since Monolith was first released. Kurtice Kucheman passed away at the age of 32 on February 23, 2014. During his life, he wrote brilliant neo-pulp poetry and prose, and he, Annie and I learned a great deal from each other. And on October 15, 2015, we lost Michelle Greenblatt, Poetry Editor here at Unlikely Books and the Unlikely Stories web site.

Both Kurt and Michelle had incurable diseases. That said, both received inadequate medical treatment from the American system, which, in its efforts to protect private industry, is simultaneously incredibly bureaucratic and punishingly expensive. Neither had to die when they did; they were both victims of this country’s inexplicable ambivalence toward basic human care.

Annie, on the other hand, is doing quite well. She now lives in Milwaukee, Wisconsin, with her loving and supporting wife, the wonderful Jasmine Mace. She has taken her childhood surgeries, her history of addiction, her nihilism, her triumphs, and her mistakes, and woven them into a life, just as she once wove them into this book.

Whenever we talk about our friends who have died, and our friends who are doing well, we must acknowledge the role of luck. Annie and I are alive, and happy. Our friends Kurt and Michelle died young, unnecessarily. More than 50 people just died in a Las Vegas massacre; roughly 3,300 people die in traffic accidents worldwide each day. Oh, and somebody just won the a lottery somewhere, so that’s neat for them.

But when we zoom in on Annie’s life, and the happiness she has found, we must examine the tools she used to find it. On page xi of this volume, you’ll see me describe Annie’s work as “wisdom without romanticism, entanglements without fantasy, sincere and lasting passions without a shred of hope.” This fearless bleakness, this strength through faithlessness, taught her how to create her own, unique happiness. Her happiness, now, in the face of an increasingly unhappy and unfixable society, seems to justify, indeed celebrate, the things that she’s done, said, and particularly written. Again, luck will always have the final say, as the poems of Monolith make very clear. But the unrelenting bravery of Monolith is the same bravery that enables Annie to take the shit sandwich she was given and make something like a chocolate pie.