Love and Other Lethal Things 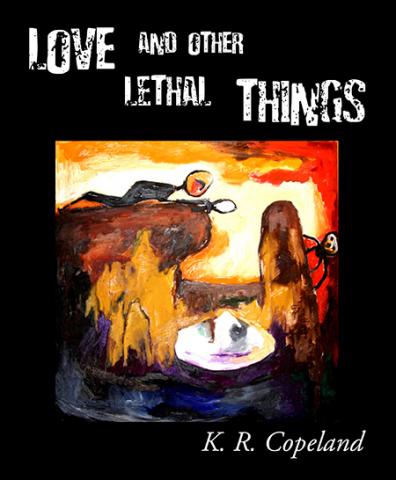 Weighing in at 48 pages, Love and Other Lethal Things is the latest in-print madness from a poet and artist whose brain fevers can be found in every sort of electronic literary journal. K. R. Copeland is a pillar of the small press Internet community, and we're very lucky that she served as Art Director of Unlikely Stories in the mid-2000s — very productive years for our art department. Love and Other Lethal Things is comprised of 28 funny and surly poems. The cover painting is by Janet Snell.

Check out what people are saying about Love and Other Lethal Things:

"Love and Other Lethal Things is Copeland's wild, far-ranging elegy to what dwells in the darkest recesses of a heart's private chambers. Its alternating Buddhist slant and intimate fantasy of selves and lovers slain, presses hard on the throttle, taking us with it on its go go speed-racer lean into the curves of longing. The cancer that is death is in our not living, not loving, not driving full force into what's surely unknowable, except at the moment one is in it. One reads a line in which (our) "her bones [are] now a show all their own" and hears in it the body as mere posable armature for the sensations that are hidden and all too often the lethal things of Copeland's apt title. These poems offer a subtle directive to be in the here and now. By turns intimate, often confessional, and surely prayerful in their connective tissue these poems shout out to all who read them LIVE. One musn't give over to dying "a little bit every day I lived as if I was unfit to breathe the same air breathed by others." And is that not exactly what we want poetry to do for us? We read to know that we are indeed fit to breathe, to ponder daily the longings that keep us from being interchangeable, posable, smiling faces, hiding our hearts from this life."
—Michele Lesko

"K.R. Copeland's poems often revel in the body and the bawdy, taking delight in wicked wordplay and disturbing imagery. Yet beneath the graveyard ghoulery, which would give Thomas Lovell Beddoes pause, beats a sensitive heart attuned to the perils of love, the pulses of the natural world, and the wellsprings of the spirit. In such tightly wrought poems as 'Villainess,' 'The Floors Are Cold This Winter Morn,' and 'Medusa loves a man in her abyss,' Copeland gives us pangs and pleasures we will not forget."
—Kevin Durkin

"K.R. Copeland is a Medusa. Her gaze is not meant to soothe and her poetry is not for the faint-of-heart. Love and Other Lethal Things is muscular and beautiful as a python, as the snakes adorning Medusa's crown. You will enjoy hardening."
—Larissa Shmailo

And consider the foreword by Unlikely Books's Jonathan Penton:

Having corresponded with K. R. Copeland, professionally and personally, for thirteen years, it feels very strange, now, to write an introduction to this book. First, K. R. and I have never met in person, and this volume will be the reason we come together: we'll meet at a literary gathering some forty hours before the book's official release, at which it, along with several other literary tomes, will presumably be ignored in favor of a nearby table of cheese. Although this isn't an unusual relationship between a publisher and author—and it's been common well before the advent of commercial airliners, let alone e-mail—it still feels weird, and I can talk about that in my introduction if I want to.

More importantly, it is genuinely disorienting to realize that this is only her third chapbook. It is published seventeen months after her second, 2057 (Olivia Eden, 2013), and the two of them, together, constitute fewer than 100 pages of poetry. (Her first, Anatomically Correct, was published by the excellent Dancing Girl Press in 2005.) K. R. is not particularly unprolific, having appeared in innumerable small-press journals (electronic and otherwise) and done a fair amount of editing, as well as an impressive array of artistic collaborations: textual, texto-visual, and audio-visual.

It seems clear that the trajectory of K. R.'s career has depended on the rise of the Internet. When we first met, I was fond of saying that one seeks Internet publication to be read, and one seeks book publication in order to win back one's father's love. (Now, being older and flabbier, I prefer to "say" it when not looking my poets in the face.) But then that suggests the tricker question: career questions aside, what kind of poet would K. R. be in a different era?

Certainly, fewer collaborations would be open to her, and we are obliged to imagine a world without the bulk of her visual work, which is generally created digitally. Would we have access to her work at all? Strictly speaking, there has always been a place in literature for those who eschewed classes in literature and careers in teaching, except that there never was (especially for poets). The rise of the mid-20th Century counterculture was dependent on technological changes, changes that saw their culmination in high-speed Internet in poverty-line homes. With those changes came the inevitable dismantling of the canon, and with that dismantling came the current MFA pyramid scheme, by which young would-be poets and educators are encouraged to be more aesthetically regressive than their early-20th Century peers, that they might differentiate distinguish themselves from their on-line counterparts. For longer than have been seven-inch-wide paperbacks, auto-didactic poets like K. R. have been left in the cold (by which I mean that they, unlike creative writing professors, can afford air conditioning).

If her work has been made possible by this technological era, it stands to reason that the era has defined the creation of that work. If her identity as an "outsider" poet controlled her career path, it influenced the poems she chose to write, as well.

All this is to say that, if K. R. had gone to school for literature, she probably wouldn't have written a Maya Angelou/Charles Bukowski mash-up. And that would've been a fucking shame.

Herein you will find the techniques, the rebellions, and the passions of one of our generation's most notorious small-press poets. The Hindu explorations into English-language haiku; the tributes to Plath and Baudelaire; the wit, the anger, and the continuing undercurrent of despair. As a meticulously-crafted collection of K. R.'s favorite themes, it is a unique glimpse into her burdens and wisdoms. All the same, I do not recommend it over a Google search of her name (although I can certainly recommend it in addition to.) Witnessing K. R.'s genius is a randomizing process, and can be enjoyed in a randomized way. Perhaps, dear reader, you picked up this book at a poetry read, and perhaps, if you were very lucky, she shuffled her notes beforehand, reading what she did not expect to. If not, don't worry—you can simulate the effect by flipping to a random page right now! It will cost seven dollars. Or you can produce an autographed receipt proving that you've bought the poet a drink.