Gods of a Ransacked Century 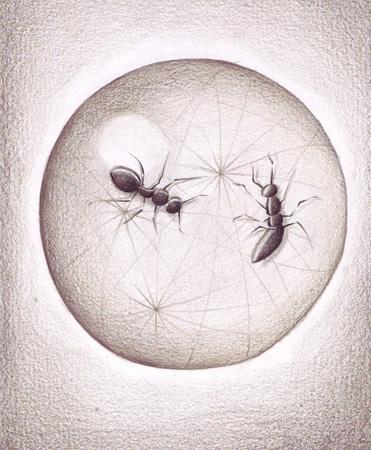 Unlikely Books is pleased and proud to present the new book of poems by Marc Vincenz, Gods of a Ransacked Century, with cover art by Inga Maria Brynjarsdottir!

Check out the Publisher's Thoughts by Jonathan Penton:

It's easy enough to say, "love is sweet because we're all going to die." It's easy enough to intellectually recognize the truth, even the profundity, in such a statement. And should such a statement fail to settle into one's daily existence, it's easy to laugh at our human failure to accept the reality of death, easy to quote the philosophers who point out that we, knowing that we'll die, act as though we are immortal. It is easy to create aphorisms, or, as they are now called, "tweets," and spread them proudly across the Internet, share them, click a "like" button, and celebrate our wit with our "friends." It is easy to call these tweets wisdom; certainly they use the language of wisdom. It is easy to acknowledge that the wisdom contained in these tweets is essentially unpalatable.

On one level, it is even easy enough for a sophisticated wordsmith (and by now, you understand that Marc Vincenz qualifies) to string these aphorisms together, change their format a bit, and write a poetry chapbook on the subject. It is, after all, an agreed-upon subject, if an unpopular one. Those who read poetry and attend poetry reads will sympathize with the presented position, and consider the subject matter brave. Throw in a few solid images and you've got a decent poetry chapbook.

That is not what Marc Vincenz has done.

In one of those pre-Twitter statements that became catch phrases, Carl Sagan said "If you wish to make apple pie from scratch, you must first create the universe." Every work of art must do this. Better works of art reveal that they have done so, and bring their audience in on the creative act. In Gods of the Ransacked Century we are immediately thrown into issues cosmic, without the grounding of the volume's later chapter breaks—formless. From there, we narrow, discussing characters, lives, and ordinary traumas. Having been molded from these traumas, we, along with the book, are given structure. We are identified, as creatures like "she who lives at the dead center, plunging" and "he whose transparency is an odd form." We are thus classified. We are told who we are, and who we must be, and how we must behave. Informed by both suffering and the horror of appellation, we leave our abstract origins and become characters. Humans. From a cosmic perspective, then—or at least, my human analysis of cosmic signifiers—the book reads like a story of failure.

And from there, partly in the oddness of our transparency, but primarily in a chapter which the author associates with "monkey-antics," we fall in love.

It is not the love of youth, but rather the love we experience in mid-life (so far past our species' original life span). Young lovers know themselves to be limited—they can speak clearly of the sweetness of their love, and the sureness of their death, even as they begin to glimpse these concepts for the first time. Gods of a Ransacked Centuryexperiences love as the result of the traumas that define us.

Such an experience is well-suited to narrative fiction. There are narrative pieces inGods of a Ransacked Century, and they add immediacy and familiarity in what might otherwise become a difficult book of verse. But Vincenz is a poet, one with particular skill in form, and he utilizes (and continues to refine) his unique approach to structure in a way that effectively reveals the synchronicity between the physical world and the words that define it. Our characters, despite being nameless, are named. Their love isdescribed. They are, through the process by which the universe was created in John 1:1, given a tangible, finite existence. We speak of characters coming to life. The words of Gods of a Ransacked Century bring characters to life quite directly.

And where there is life, there's that other thing. Gods of a Ransacked Century is infused with the knowledge that by creating a universe, creating individual humans, and by creating their love, Vincenz has doomed all these phenomena. To identify is to create. To create is to ensure destruction. These are the circumstances under which lovers are obliged to create sweetness and artists are obliged to create beauty. And while it only took me two rambling pages to acknowledge this, Gods of a Ransacked Century—with economy, strength, and passion, shares it, with a sanguine sincerity unlike anything I've read before.

from Gods of a Ransacked Century:

The blond boy is cold.
Troubled.
Six minutes to shear him of his woolly hair.
Three warbling on the scale. Stand perfectly still!

Notes on an unknown composer's score.
Ribs riddled with moles.
Elevated heart-rate.
Memory of hair glimmers on the floor.

Breath stirs beneath the air. One-twenty-four.
Tall, tall for his age. Growth spurt.
Bulbous knees pop against a rubber mallet.
Play soccer do you boy?

A nod. But the tired eyes waver, move beyond the question
to the man stripped of flesh on the wall, the sinews
and arteries running down to the tips of his fingers;
the heart, simply a muscle within, the heart paper-cold.

Ink blots across a maple desk. But there are other kinds
of cleverness, the doctor says to himself, moving
his fingers across the stubbled cranium, referring again
to that white ceramic bust he so adores.

Aha, the temperament is tightly strung, the sentiments
must be curbed. Far too much wonder, far too much hope.
The world is real, child, real as this wall. That wall is but brick
and plaster and paint thinks the boy, and shivers.

Night after night the blond boy walks from his sleep,
walks the narrow walls to his father's workshop—
night over night, eyeing, eyeing into the darkest hours of morning,

eyeing what lies beyond the branches of the willow
brushing up against the window, and
a white down that shrouds the impenetrable.

What people are saying about Gods of a Ransacked Century:

"In Gods of a Ransacked Century Marc Vincez gives us a full cosmology, with a broader sweep than the Hebrew Qabala's stone-plant-beast-man-angel-god. Kicking things off with a "flurry of non-dimension" lasting a billionth of a second, he wastes no time delving right into the materia prima of old alchemical specs. Tachyon-waves coagulate into atoms; molecules grow double. Shiva's formative Lasya commences with the "taunting belly dance of cells diversifying within light and water." Next, the "viral ice" of a meteor panspermatozoically seeds our "life-blessed world." Teeth and claws swell to spears; arrows exacerbate into bullets and hydrogen bombs, and so forth. And, just in the nick of time, we come to the finer evolutionary elaborations that Marc Vincenz is most loved for: the gastronomic and erotic. "Rocket salad with artichokes and bacon, that superb Sauvignon Blanc '88" are delectated, of course, by women. Like lightning bolts discharging in pripordial soup, Marc Vincenz' women quicken their creator's materia prima. The end result, as always in his books, is a further flowering of his generation's finest love lyrics."
—Tom Bradley

"If it is possible for a book to be both frightening and peaceful simultaneously, Marc Vincenz' Gods of a Ransacked Century is that book. Being kept on an edge like this as I am turned to milk (amidst the "crackle of twin" and the "flurry of non-dimension") makes me feel things here. If "distances seem promising"("from a distance"), then this generous and piercing book must be the act of breaking a promise, of breaking me (into something more open) as one would a promise, because the incessant presence of "the blond boy" (those "whispering pheromones"), the "lions anticipating [the] exaltations" of their loins, the "halos hanging on demonstrative" really make me lyrically and lustily riven. The way I am being talked to (in Gods of a Ransacked Century) and what I am being talked to about (herein), make me want to enter and help lift, rearrange the cleft, change the lone burden into something entirely else. I am pleasantly surprised that this sensation is extracted from me here. Vincenz has really surprised me, as even though "the Ouija board is speechless" it is also a "his," and though I am many things, I am not a his."
—j/j hastain