Ghazals 1-59 and Other Poems 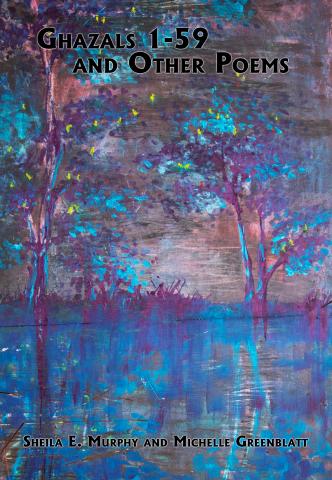 Unlikely Books is thrilled to present Ghazals One through Fifty-Nine and Other Poems, the collaborations of Sheila E. Murphy and the late Michelle Greenblatt. Framed by the beautiful cover art of the late Jim Tascio, this book presents an enduring collaborative process with some of the most masterful English-language wordplay you've seen. Sheila E. Murphy's Introduction describes the project:

Throughout 2005 and 2006, Michelle and I were in frequent and intensive contact as we collaborated on several different poems. Again in 2014 until the time of her passing, we renewed our work together. Michelle’s illness removed her from writing for several years between those periods of time.

Our work dovetailed naturally. Michelle was open, generous, and extremely polite about the process. I think we read each other’s work and feelings well, and I always enjoyed our way of working. We alternated the starts of poems. Throughout our work sessions, Michelle consistently showed devotion to refining the lines adjusting the flow, and express willingness to shift any pivot points she questioned.

Our method was simple and intuitive. We shared passages of varying length and responded with whatever worked in answer to the other’s passages. We followed the nerve points, feeling the language pulsate and grew the piece. Oddly enough, we were less deliberative about endings than the beginnings and middle portions of our poems. Sometimes the final strokes of a poem emerged and we looked back only to discover that a piece was finished.

As with any collaborative poetic venture, the work separates itself from each of the writers, I believe. Michelle’s and my conversation encompassed a wide range of perceptions and different levels and types of experience as referents. Her spirit was prominent in our dialogue and our work. I always admired and continue to admire Michelle’s dedication to poetry itself. It appeared more real to her than physical existence, if that is possible. The work and Michelle’s presence will always be alive for me. Hers is a powerful spirit, always present tense.

And consider the preface by Vincent A. Cellucci, "Synesthesia in the Ghazal Garden:"

During a time when our democracy is undergoing a pretty unpoetic post-mortem, I find myself returning to the liberties offered and reflected in poetry, holding them more dear than our past and future “neon clear bombstains” (Ghazal 39). And certainly, even with the diverse celebration of voices surging in contemporary American letters, maybe more successfully than many other facets of the American “dream...like acres of garbage that glitters” (Ghazal 9), there is an American cultural bias intrinsic to my opinions. Like the taco, pizza, or gyro, Americans evidence again and again our unruly propensity to take something different and make it ours, according to our pleasure; and oftentimes, even if it fails to preserve its origin culture, it persists as a cultural phenomenon that serves as a newfound staple (I know I prefer cheddar on my taco).

This spirit is evidenced in the way American poets approach form. Form really is the American threshold to poetry. Think of the first haiku or sonnet you composed. Oh Lord, those six primitive words, those incorrigible couplets! Now poets freely redefine every aspect of these forms according to the needs of their “text/s.” We repurpose or reject any rule deemed arbitrary enough not to follow, hence dilapidated villanelles, arrested sestinas, or 13- or 15-line sonnets—with maybe secondary s+7s on top! After an exploration of contemporary poetry, a pantoum is hard to take seriously without seeing some plight in the poet’s adherence to form.

When people ask me why contemporary poets don’t often write in form, more specifically end rhyme, I say that our current world is unrhymed; the simple sense of surety and formidable relationships have been too complicated or are too rare now to impose that sort of order on a poem. It’s not that we, the sensory writers of the West, can’t utilize formal rhyme. It’s that we won’t make the world that guessable, digestible, sensible, or easy to be retold with a puerile melodic rhythm. We are inundated, reeling, wasted, and even the ideas that find rhyme for us are infinitesimal when compared to the chaotic free-verse universe we currently perceive and often, when we are honest, feel mostly threatened by.

But frightened or not, Americans—with some horrifyingly powerful exceptions—don’t do strictness, and we hate authority. I take comfort in those qualities. Taking liberties is the spring of creativity. It is our most valued and basic freedom to disagree or reject and not be punished. To say, hey, I know that’s the way it’s always been done, but that doesn’t work anymore for me. I’m going to do it this way, a new way, my way—and sometimes, if you are lucky enough to share in the stakes of creativity with another, our way. And here enters a defining factor—I would say more than trend, at this point—of contemporary poetry: It’s social, it’s collaborative. No longer conceived as divinely whole or indivisible, it’s a synthesis. It takes the compassion between two or more combined. The visionary isn’t me; it’s we. Not only do we want to get there; we want to get there together and changed. Because it’s not worth it alone. The power of collaboration is in the bond that escapes inertia. American poets have found that independent writing and even publishing offers little incentive (and is mostly void, hollow, stagnant) compared to the collaborative act, the synergy of creativity that combats the “mirrors of inadmissible distance” (Ghazal 4).

Unlikely Books is well aware of the synergy and community verse requires now to even warrant being put out into the world (not to mention the liberties and rebellion intrinsic to poetry). Collaboration is what brought me to this publisher, these poets, and the verse in this volume. The ghazals that Sheila E. Murphy and the late Michelle Greenblatt composed are presented here as a legacy to the departed poet and all the poets Michelle touched so dramatically through her immense talents as a poet and editor (I know I’m indebted to her for so graciously and wisely editing my Unlikely collaboration), but also as a legacy for mutually inspired spirits, for synergy that is communicative and can only live between two people creating moon music in minor keys, together.

Michelle, to those familiar with her fight with fibromyalgia and the myriad ways our first world healthcare system failed her (a nationwide conflict that saw a glimmer of hope and now turns into a war of attrition night by day) could really be considered a Joan of Arc of poetry given how she lost the battle she so valiantly waged to live, with a poet’s weapons of choice: words and compassion. Those who knew her drew strength and insight from her frailty and infinite capacity for feeling, which it seemed was most cruelly handed to her with an equally interminable wellspring of pain. But that did not stop her from writing ASHES AND SEEDS or from reaching out and befriending other contemporary poets (she also collaborated with Vernon Frazer on Definitions of Obscurity [Originally published in a different form as Dark Hope {Argotist E-Books, 2011}]—both Unlikely Books).

Sheila, author of American Ghazals (Otoliths, 2014), informed me Michelle wrote her years ago and they “connected very warmly, based upon her heartfelt devotion to writing and my lifelong pursuit of same.” The two poets proceeded to forge a creative friendship, working on some shorter pieces together. As their collaborative work took root, the pair “maintained a sense of continuity about creating additional, more extended work together.” The two creative patches that gestated the majority of these ghazals were approximately 2006 and 2014-2015, two periods separated by the severity of Michelle’s illness.

But Sheila’s patience and the rewards of poetic connection sustained the two to produce this book-length exploration of the contemporary ghazal form, which Sheila posits “offers gentle freedom from the strictures of its origins. American English accommodates a freer form” than perhaps the Farsi and Urdu languages where the form originates. Not restrained to the repetition of the radif and qafia, Shelia and Michelle’s ghazals propel their subjects and wordplay forward couplet by couplet, kenning by kenning, with little restraint, enabling the duo to confront the “liquiddark” (Ghazal 4) and broach subjects as divergent as childhood is to the metapoetic. Their collaborative process consisted of the two writing alternating couplets, and this reinforces the essence of the form the poets isolated over others: “the essential pivot as key to how the work can evolve with considerable surprise. How perfect when collaborating, it seemed to us.”

Synesthesia, which Michelle experienced frequently, is the neurological ability of combining senses: most famously, the ability to smell color. In this book, it is both a real phenomenon and a literary technique, found in abundance within the ripe diction-garden of music, time, and masks buried and blooming. Michelle and Sheila combine their vast vocabularies, moon mythologies, and poetic philosophies together, guided by an original, Americanized couplet form of the ghazal that pivots into new realms of form and sensation, to give us just a little rain to weather our days, because “the safest place during a rainstorm is in rain” (Ghazal 37), where compassionate creatures come together, actively ceasing to “chaperone the silence” (Ghazal 47).