The Deepest Part of Dark 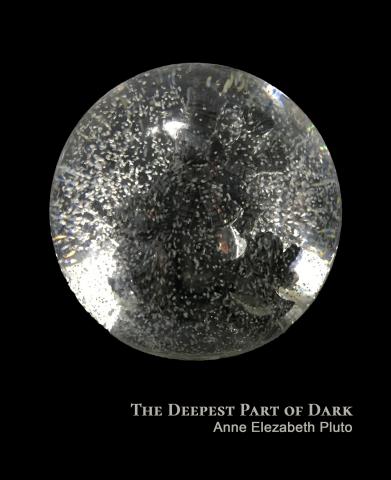 Check out what people are saying about The Deepest Part of Dark:

Set on the outskirts of Eden, Brooklyn, and on the boundaries of religion, Pluto’s poems are complicated love letters to a god caught mid-shape-shift. These poems evoke a world which is equal parts ancient and immediate, and where the dead speak together, from Portia of Shakespeare’s Merchant of Venice to Lucie-Brock Broido. Sometimes whispering in Russian, sometimes crying out in the language of myth, these poems are replete with love and its breaking.
—Amy King

“You remain/present always” Annie Pluto writes in a poem for her mother and here is the heart, the core, the soul, of this most beautiful book of poems: presence, remembrance, memorial, for family, friends, world. “I saved all your letters, the poems/written for the counties of the land/of 10,000 lakes, where I have never yet/been..” Pluto’s sense of responsibility, what the poet does, her sense of hope, what the poet brings, is why The Deepest Part of Dark carries us to light, to understanding, and gratitude. Be amazed.
—Mark Statman

A collection of emotionally charged poems written with constraint and  mastery of language, pulling the reader to depths of nostalgia and stages of life without imposing the author’s perspective, but engaging the senses to experience the reader’s own relationships in all their complexity in a new light. A self-awareness follows effortlessly.
—Sllva Merjanian

Anne Pluto’s collection, The Deepest Part of Dark, is unworldly while being located a specific time and place, in New York, or an alley outside a house, or a backyard in early fall. Her images remind the reader of the terse quality of Wallace Stevens and Pound. The image carries the reader into a space of connectivity where we are transported in various worlds of afterlife, the life here, and an in-between state. This spiritual collection reaffirms loss as a substantial space to grieve without fear, a place to be lost but gleeful, a space to notice the divine in the everyday approach of racoons in the side yard. Pluto’s ability to begin with a certain space that induces a specific tone, ‘cemetery verdant’ and then turn gracefully into ‘blossom pink and loam’ is an example of her poetic depth. The elegiac poems to her mother and father bloom here in the reality of the aftermath of losing one’s parents and sitting down to the business of life. Her poems are filled with magic and wonder of past and present lives; they are a poignant connection between the natural world and our relationships with each other that the tasks of daily life seal into a reassurance that “we are all in this together.”
—Gloria Monaghan

In Annie Pluto’s remarkable The Deepest Part of Dark, the unlit segments of the human world are ever-shifting, ever-present, never knowable in the fullest sense, and constantly sharing something personal. The sense of the “dark” in this collection is psychological, emotional, and physical in the sense that some poems take us to grave sites and elegize a familial Russian past as well as the American passing of more recent family members. There is a spiritual sense of darkness in these poems is still one other way: Pluto’s sensibility inherits, even if she does not necessarily embrace, the fragments of western religious thought and tradition that swirl everywhere around her. The language in these poems gives itself to a multiplicity of meaning rather than to certain meaning: “Hallowed out of the father/are the dead/and on my knees/with shimmering eyes/to catch/the light.” As they range from grief to love, from lamentation to a beauty that speaks from the silence of dark places, these poems reflect the mature vision of a woman in the fullness of life.
—Steven Haven