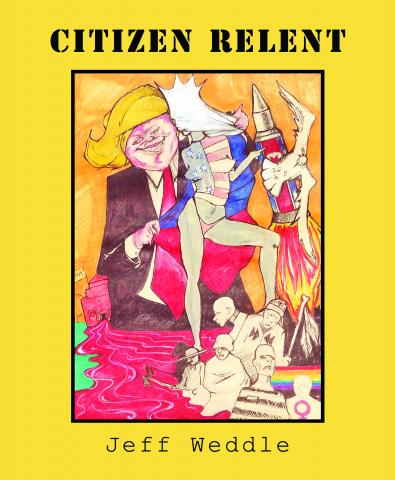 Unlikely Books is delighted to present Jeff Weddle's Citizen Relent, a ferocious and unsettling book of memory, loss, wistfulness, and the everpresent spectre of America's political future, barreling down on us with unstoppable horror.

Locked behind Lem Arredondo's explosive new cover art, Citizen Relent fearlessly analyzes the author's inner and outer worlds, exploring the Trump era and how it effects poets, citizens, and everyone else.

Check out what people are saying about Citizen Relent:

Jeff Weddle’s poems cover immense distances and depths on the impossible yet necessary journey to the existential seizure.  These thematic and tonal shocks reveal our monstrous and delicate conditions to ourselves and others.

This collection, by turns breezy, dark-hearted and fearless, offers a poetic realm governed by the moral imagination.  We move through somber meditations on parenthood, love, loss, time, mortality…we enter poems of bitter political critique that eviscerate America’s violent consciousness.  The volume closes in lyrical, rueful modes that honor the complex confessional disclosure—“…that even I, grotesque, / was once your heart’s sharp prize…”  The poems of places that hold the youthful past are resonant, authentic, and dry-eyed in vivid celebration.

Ultimately this book is a celebration of the poem in its myriad powers, its singular ability to penetrate and ascend through human experience.  Weddle proposes that “Each person/ is a mystery poet/ but we mostly choose slumber.”  Jeff Weddle’s "What We Now Endure" provokes us out of our drowse and awakens us to our own redemption.

—George Eklund, author of Each Breath I Cannot Hold and The Island Blade

A reality sandwich of Trump-flavored bologna between pure love or, at least, its intent. Speculative on one’s own history and ominous to humanity, just a bit tongue-in-cheek aside, yet proud to provoke a soul search of the most pious. If these poems don’t slap you into redemption, listen for the bagpipes, ‘cuz you’re already dead.
—Cheryl Ann Townsend, editor, Impetus

"The world today is a complicated place, and sometimes, the best remedy for complexity and chaos is simplicity, breaking the tough topics down to basics. This is the best function of poetry. This is also a description of the poetry in Jeff Weddle’s new book What We Now Endure. In this collection, there are 106 pages of remedy: simple thoughts, encapsulated moments – and the connections between – create these breathless poems of life, magic, family, dreams, and love."
—Michael Hathaway, publisher, Chiron Review