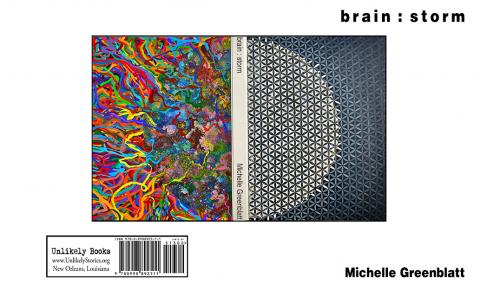 Unlikely Books is very proud to re-release brain : storm, the 2006 book by the late Michelle Greenblatt, with new cover art by Sana Arjumand. brain : storm has been out-of-print following the death of its original publisher, Thomas Lowe Taylor, but it's an extraordinary book in concept, execution, and production. Consider the Editor's Introduction by Jonathan Penton:

brain : storm was written at the behest of Thomas Lowe “Tom” Taylor, the editor and publisher of anabasis Press. It was written, from first draft to last, in two months of 2005, and then published in 2006. It includes three pieces: “some halo,” a poem in 100 parts (although it should be noted that both “100” and “part” are defined rather loosely), “not a very big box,” a novella, and “duet,” a poem written in collaboration with Tom. The three pieces tell essentially the same story in different ways. “some halo” and “not a very big box” consider a displaced woman in a drug-addled love triangle, and “duet” tells the story of the conception, writing, and editing of the other two.

“some halo” and “not a very big box” both have metafictional interludes, so the total effect is a book that is aware of itself as a book, exploring its own birth. But the interludes are used sparingly and precisely; ultimately, this book is about the story, and not the storytelling. (We would see this careful framing again in Michelle’s most mature work, “Streaks of Scarlet,” a 100-part prose poem in ASHES AND SEEDS [Unlikely Books, 2014].)

Michelle and I began corresponding in 2004. One of her very first letters to me talked about her belief that every poem, indeed every draft of every poem, should be meticulously documented and dated; when possible, she included these dates in all published work. At the time, I was skeptical. Poetry, especially confessional poetry like Michelle’s, serves the gods of myth, not fact; the “scepter, learning, and physic” of Cymbaline’s funeral song exist as literally today as they did in 1608, and Imogen exists in the Elizabethan and contemporary worlds equally. And still today, now that Michelle is gone, there are times when I look at some of her works and wonder if they are too-thoroughly documented.

In brain : storm, on the other hand, these dates serve the clear and concrete purpose of accentuating the storytelling frame. Compare to Marguerite Duras’ The Lover, in which an elderly Duras frames her teenage adventures in alternatingly precise and indistinct memory. The dates in brain : storm frame Michelle’s misbegotten romance in and into something very real and very sharp. In two terrible months of reminiscing, Michelle explored how fast that chapter of her life moved, how tedious it was, and how close to death she felt by the relationship’s end.

It is this framing mechanism that was the focus of my editorial work. I’ve made light formatting changes to “not a very big box,” and heavier ones to “some halo,” with the intention of pulling out Michelle’s frames more vividly. I’ve changed the order of the three pieces (they were originally ordered as “duet,” “some halo,” and “not a very big box”) and rearranged the numbering in “some halo.” These changes felt huge to me, though I imagine they’d seem small to almost all readers.

Michelle was actively working with editors and publishers from 2003-07, then disappeared from the small press until 2012. At that time, we began a near-daily communication, and continued a close friendship until her death in 2015. In those final years, she often talked about wanting to revisit brain : storm, and we loosely discussed her plans to create brain : storm :: re : loaded. Unfortunately, she did not return to this project. Tom Taylor died in 2009, and anabasis Press did not continue. So the various changes I have made are based only in our conversations, most of which were by telephone and unrecorded. This edition of brain : storm fulfills her desires only minimally, but I am at least glad to bring it back into print.

Again, brain : storm does not belong in the realm of fact, and the book should not be taken as literal memoir. But its truths—about heteronormative dominance, about love, and about Michelle—sting quite clearly. Michelle was only twenty-two when she wrote it, but its casual language directly enhances its sophistication of style and theme. It’s my belief that any lover of confessional language will enjoy it, as well as those studying the mythological entity, Michelle Greenblatt, who joined us on this planet for so short a time.

I am grateful to Michelle’s mother, Pearl Goldman, for giving us the privilege of republishing this volume. Thanks to Jim Leftwich, who assisted me in hunting down source materials, and especially Christopher Shipman for his invaluable editing advice. Thanks also to Rosalyn Spencer, and to the cover artist, Sana Arjumand, whose generosity has been vital in making what I find to be a beautiful book.

Check out what people have said about brain : storm:

This kid is chum funny, fucking language where it wants to be seen, her boxes frigging wild before it speaks and when it does you’ll be left behind, entering your other self you haven’t met yet
And places to enter before the
Curtain falls upward,
Poet is loose catch IT if you can and forget it if you
Want to be recollected
A first time hot on soundings
What a context contest if you could tangle the leaves
Celebrating the passing out,
I see her generation unmaking the laws that fuck us all,
Lucky just going with it

“some halo,” Michelle Greenblatt’s highly readable work, conveys a beautifully ugly portrait of a life, and the life that followed that life, a life presented in a wincingly acute manner that allowed one to experience a destructiveness but embrace stunning accounts of her active present, from which she recalls items in ‘pencil-lit opalescence.’ Greenblatt’s ability to capture abstract emotions and sensations with a precise and unexpected slight-of-hand is a squirmy satisfaction to encounter. Acting as a cenotaph, “some halo” places items into black containers and stacks them as if erecting a monument or a testimonial to the false parallel of touching the sky with the things that weigh one down. “some halo” has a renegade spirit that perfectly evokes the ambiance of thunder.

Mare of the night scalds dreams foisted not made.

“I crave because I am running out.” Each likely pain-verb’s supercharged (“smashing continents together just to hear the land scream”), so that sensory candescence of the violation thralls as if forecast were daunted by accurate prehistory as small precisely and as widespread as it is.

Vivid to the tensile power, text painstakingly crafted yet run full-on scorches the outer reaches of adjectives that preempt voicing equal to unvoiced pain. That requires a capacity to release a found, compound vocabulary, stretching the already pulled archway. An immensely complicated, multisensory peel of every known or imagined protectorate of the spirit. Specificity of fear is central here “knifed by the milk of the honeyrivers.” Nothing ever lifts. The writing fluently decimates any conceivable illusion of safety in the face of the most scathing pain. At each reading, horror continues to chastise the lie that this is not infinity.