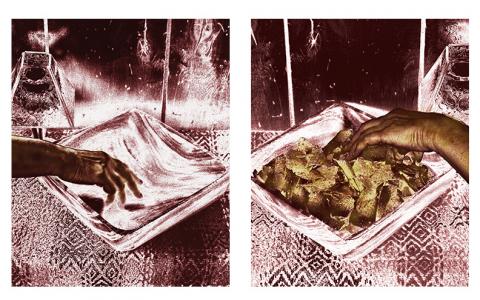 Blood and Salsa and Painting Rust were published in late 2006, and bound together as a flip-book in one volume (on one side was the cover for Blood and Salsa; flipping the book over would give you the cover for Painting Rust, and the two books terminated in the middle) with cover art by Shari Nettles. They quickly became some of the most discussed chapbooks of the past few years—reviews available on-line include Tom Bradley's extensive analysis at NthPosition, Mary Jo Malo's review at Galatea Resurrects, and Christopher Robin's review for the Underground Literary Alliance. They sold well beyond the meager expectations of a poetry chapbook (TO THE NICE YOUNG COUPLE WHO PURCHASED THEM AT THE KGB BAR: sorry about my eyes, I thought there was a pen down there), but are now out of print, so you can read them here for free.

Check out this filmed selection from Painting Rust:

Or these poems from Blood and Salsa:

I wanted to go to a quiet place, so
I found a pretty spot on the side of the mountain
but all I could think about was that old
boyfriend of yours
and how he threatened to kill you

I had to climb higher

But when I got halfway up the mountain, I realized that your name wasn't on the list

I could have added your name to the list, but I had not thought to bring a pen

I couldn't go back down, because by the time I went up again I would forget how to cry

I couldn't cry without your name on the list, because then how would I remember that I ever loved you?

I would have happily written in blood, but the nearby rocks were so small that all I could do was put a bunch of ugly scratches on my hand