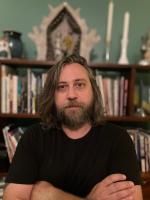 Christopher Shipman is the author of The Movie My Murderer Makes: Season II (The Cupboard), coauthor of Super Poems II (Kattywompus Press), coauthor of Keats is Not the Problem (Lavender Ink), and coauthor of ~getting away with everything and _a ship on the line with Vincent A. Cellucci (both from Unlikely Books). His work appears in journals such as Cimarron Review, PANK, Pedestal, Plume, Salt Hill, Spork Press, and TENDERLOIN. Shipman lives in Greensboro, North Carolina with his partner Sarah K. Jackson and his daughter Finn, where he teaches literature and creative writing at New Garden Friends School and plays drums in the band The Goodbye Horses.

"~getting away with everything" live book release party

"~getting away with everything" virtual book release party

We’re not talking anyway. Not
about anything other
than COVID-19 anyway—
singing its monstrous aria,

Scenes from "The Movie My Murderer Makes: Season II"

Whenever I wake from a bad dream, my murderer gives me homework. He’s there waiting. Not at the edge of the bed, as one might assume, with a hand resting calmly on my back, but sitting alone in the dim light of the kitchen.

"In the Hopeful Future," "Keats Isn't the Problem," and "Bowie Second Line"