Once we fully understand the mechanics
Of quantum consciousness,
We will finally be able to prove that humans
Create poems at rates
​Of between 40 and 120 cycles (i.e., poems) a second. 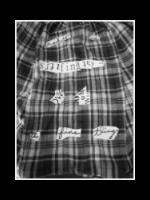