"Sailors Take Warning," "Staying In," and "White Crone in Chinatown"

Rasps of foggy air from the hole in his neck:
A man – once a horn player –

Landscapes blown barren, trees torn apart.
Bruised skies reflect a sputtering man
who once made music with a band.

The man blows mists, faint hisses, from his hole.

Then signals – NO NO – waving, shouting silently,
when video reruns were suggested –
Or, maybe the guys could gather one more time. . .

Vehement shakes and frowns,
points to his pad and pencil.
“Too sad” he writes . . . (to remember,
to be no longer able to play)

Cushioned between two sheets of soft pink tissue,
a wisp of gold leaf, thinner than real leaves, new or fallen.
Dad, trained as a sign painter after the war,
demonstrated how: lift a tiny bit
on the point end of the smallest paint brush,
spread it like liquid slowly
around the narrow outside edge
of the first letter only – sunbeam –
halo for the icon's saint.

An ominous double bass set up
at the foot of the middle aisle.
All faces staring straight ahead.

The sky, flat gray a few hours later.
Only the whistle of wind through trees
that have flung off their leaves in fury.

"All poets are Jews"  ~ Marina Tsvetayeva, in Paul Celan

Son, fix this girl a nice ham sandwich
to take for her ride
said my elderly bedridden patient.

Now Mama, he answered, looking
sideways at me, She might be Jewish.

My neighbor is Jewish, she whispered
and I didn't even know it.
He doesn't look it.
When I asked him to go to church with me,
he said: We don't go to church.
What are you saying?  I said.
You don't go to church! We are Jewish,
he said.  But he's very nice.
He brings that little brown boy
over -- adopted, I reckon -- every
single day to visit me.

It's good to have people like that
in this world, said the son.

Plotting escape, I nodded.
Sounds like a wonderful neighbor, I said.

She nods if a fellow swimmer peeks her way
at the local pool, careful not to stare.

She hums along internally with the lady singing opera
in the shower stall across the way.

She's mindful to glance only briefly at the shrine
with fruit and incense in the shop at the foot of her building.

She pretends not to notice if the neighbors eye her grandchild;
wonders if they wonder if she is the grandma.

She yearns for but does not touch the enticing inscrutable greens,
while looking for pears and ginger tea.

She's hooked by the dancing dragons in the snow outside the window,
but hopes the drums don't wake the baby.

She hears loud spirited chatter when the windows open in the spring:
seemingly arguments.

She dreads the outdoor smokers in front, aside, and behind her;
the spit on the sidewalks, dead rats in the alley.

She swerves on sidewalks, avoiding tenacious left-side walkers,
fleetingly wonders if that's the side they drive on where they're from.

She takes off her shoes at the door. When someone does not,
it's noticeable to her now.

She relishes the lesson of being other. She's grateful
when the roses bloom in one tiny plot near the grimy street. 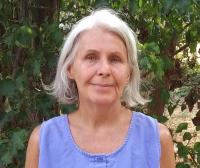 Ann Neuser Lederer's poetry and nonfiction are published in journals such as Diagram, Passages North, Brevity, 2 River Review, and UCity Review, whose recent "noteworthy" section presented ten of her poems. Her work is honored in Best of the Net and Ohio State University's Vandewater Poetry Award; published in anthologies such as A Call to Nursing and The Country Doctor Revisited; and in chapbooks Fly Away Home, Approaching Freeze, The Undifferentiated, and Weaning the Babies. Ann was born in Ohio and has worked there and in surrounding states as a Registered Nurse. For more information, see ann-neuser-lederer.blogspot.com.