An hour or so later we were deep in the shit. This is how Banquets went down: The chefs would organize an assembly line to pump out a big dinner for hundreds of people, course by course. First the appetizer (usually a fruit cup) would go out---after that went the salads, then the entrees (this particular night’s choice was chicken cordon bleu---funny how, even today, I remember that) and then the dessert. The chef will usually pick his favorite dishwashers (in this case it was Terry and a couple of the peanuts) to work the assembly line, which would leave us half-equipped when the salads came back, and we’d be buried.

Pete had just rolled back in from Happy Hour and he was half-drunk, flitting about. I knew he’d be good ‘til ten or eleven and then he’d leave us in the shits.

“James! How you doin’?” He hollered from beyond the machine.

I was unloading the dish machine----taking hundreds of clean dishes that were coming out of the conveyer belt and stacking them, to the best of my ability, on the shelves. Whenever the peanuts got back off the banquet line, they might help clear some of the shelves off for me. Until that time, I was running out of room, fast. I tried to express this to Pete until Jeff thundered, from the other side of the kitchen, “I need monkey dishes!” Pete grabbed an armload of monkey dishes and I was alone again.

Clem, Bob and Bruce were up front, getting battered with dirty dishes and glasswear. On top of the banquet, the restaurant was also hopping. Dishes kept coming through and the conveyer belt kept stopping. I couldn’t keep up with the number of dishes they were pushing through at me.

I looked down toward the front end of the machine and saw Clem’s greasy, grinning face peeping back at me. “Let’s go, James,” he shouted.

Piles and piles of salad plates were being pushed onto the counters. Hundreds of them. The Tom Jones Dinner, which was a special banquet that consisted of seven or eight courses, was coming back. Big plates filled with prime rib bones began stacking up.

Then it kicked in. I think it kicked in for all of us, too, because that was when Protein Bob looked my way and meowed at me.

The flying cats had arrived.

This seemed incredibly funny to me, now, and I screamed, “Every plate a Picasso!”

Nick Armstrong lurched into my line of vision so forcefully his chef’s hat nearly came off his head. “You! You wanna go home?!”

I laughed even harder. “You don’t want my answer on a night like this!” Nick looked exasperated, but he went back to what he was doing. The shit was coming down, and he didn’t need anyone saying, “yes.”

From the loading end of the machine, Clem, Bob and Bruce were all meowing at me. I meowed back. A bus girl from the restaurant screamed that a big rush was coming back and we might want to get some of the mess cleared off. The guys meowed at her.

Everything had become hilarious. Someone off to the side shouted. It was Pete, grabbing armloads of dishes, smiling ear to ear and yelling something to me. I couldn’t make out a goddamned thing he said in all the din. It was time for him to go back to Grogan’s and find that groove in the bar shaped like his forehead.

Dishes came out at me and it became my zen master objective to remove them as fast as I could. I stopped caring about organization. I heaped illogical slop piles of dishes, pots and pans everywhere. If they were a still a little dirty I stacked them with the clean ones. I felt like I had one up on the world. The guys laughed and meowed at me and I meowed back.

The steaming billowed and the jets blasted water and hot air. The air seemed to wobble and shake and the dish machine was like our jolly vessel piloting through the kitchen.

The dinner was plated and deployed and Terry lumbered back to the area with a serene smile on his mug. “Feelin’ pretty good, huh?” I just nodded. Up front, big platters full of meat and bones were being heaved onto the counter and this was just the beginning of a ridiculous food medley that would be parading down our pighole all night long---meat and fruit and bones and milk and corn and booze and butter and more meat and ice cream and more booze. 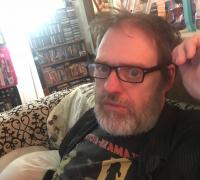 C.F. Roberts is a writer, visual artist, videographer and antimusician living in Northwest Arkansas with his wife, writer Heather Drain and a small menagerie of animals. He published and edited SHOCKBOX: The Literary/Art Magazine with Teeth from 1991 to 1996. He sings lead for the rock band, the S.E. Apocalypse Krew while also commandeering his own industrial project, 90 Lb. Tumor. He most recent publication credits are in Fearless, Paraphilia, Pressure Press Presents, Crab Fat Literary Magazine, The Birds We Piled Loosely, Blue Collar Review, Corvus Review, Antique Children, and Guerilla Genesis Press. His book, The Meat Factory and Other Stories, is available from Alien Buddha Press.