Out on the tracks past the town of Pikesville, the sun beat down on Zeke like it was trying to kill him. Sweat dripped into his eyes, and his brain felt boiled in the heat. In the distance, a mirage melted the rails and timbers up ahead into the air.

“Right out past Cooley’s Pond, about halfway to Galesburg, there’ll be a big curve and then it’s right where the tracks start to head towards the bridge,” the brakeman told him; Zeke had to give up his last two smokes before he loosed his jaw, said something about the railroad company not wanting nobody to go out there cause of insurance reasons. Bunch of god damn buzzards all they was.

It was five days ago that the train carrying Billy Rae flew off the tracks, killing fifteen people, including Billy. Zeke punched his trailer walls full of holes when he heard.

“He lives in Galesburg, and his name’s Trevor,” she told him. “We’s in love.”

Zeke begged her not to go, said he’d change his ways, but she wouldn’t hear of it none, said she already bought her ticket and that they was through.

He rounded a curve, and started to see big ruts in the dirt on the side of the track. As he walked on, the ruts got deeper, and the ground more tore-up. The cicadas off in the weeds that’d been buzzing real loud all along was getting quiet now.

Zeke stopped there and looked out at the scene before him — trees snapped in half, splinters jutting out everywhere, purple tape spread all around — train cars had been hauled off already, but some bent-up pieces of metal were still strewn about here and there.

He tried to tell her not to go. Told her she was making a mistake by leaving him.

There was some rustling in the bushes a few feet away. A fella came out of the woods, zipping his pants up. He got startled when he saw Zeke.

“Whoa,” the man said, slowly making his way out of the pokeweeds and thistle, “how goes it, brother?” He nodded hello and walked over to where Zeke was, “Didn’t realize there was anybody else out here — the name’s Trevor.” He was tall, lanky, and had tattoos on his arms. An old canvas satchel was slung over his shoulder.

“Yeah?” Zeke asked. He tried to spit, but there wasn’t enough moisture in his mouth.

“Yeah. Trevor Hickson. This is where my baby, Billy Rae, died when that train derailed. Breaks my god damn heart. That’s why I’m out here. Just wanted to see the place where it happened.” He kicked at some rocks on the ground, then lifted his eyes to the bits of wreckage strewn about. “We was just starting our life together. Even talked about getting married. But she had to get away from this guy she was seeing, some loser named Zane, or Zeb, or something like that. He wasn't no good for her.”

Zeke’s jaw clenched up. He turned and looked at Trevor.

“The name’s Zeke, actually.” he said.

“Oh shit! Sorry, man.” He tried to laugh it off. “Hey,” Trevor said, his voice getting serious, “I don’t want no trouble, now.” He placed his hand over the buckle of his satchel.

"It’s alright, man.” Zeke forced a smile. “There ain’t no need for trouble.” Zeke thought about how he’d like to cut Trevor Hickson up, watch him bleed to death all sprawled out on the ground. He’d leave his body to shrivel in the harsh sun. “You from Galesburg, right?”

“Yup,” Trevor replied, “Up the tracks a-ways.” He pointed off in the distance.

"Guess she talked about me some?"

Both of them turned their eyes back to the wreckage site. “Hey, she was a pretty girl wasn’t she? Mean as a snake — but pretty.”

“Sure was.” Zeke replied. They both laughed a little bit, then things got quiet again.

Trevor reached into his satchel. “Here you go, friend, try a bit of that.” He handed Zeke a jar of moonshine. Zeke accepted his offer, took a long drink. It was hot, and burned like the devil going down, but it tasted good.

“Thanks, man.” he said, “Hey, you Galesburg fellas are alright, you know that?”

Zeke reached into his back pocket and felt for the handle of his switchblade. 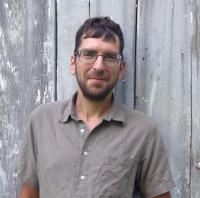 Bart Dziegielewski is a Creative Writing major at Southern Illinois University in Carbondale, Illinois. Lately he enjoys spending time lifting weights, drinking moonshine, and imagining himself fishing for catfish in the dark, muddy waters of the nearby Mississippi River. If you would like to contact him, email bartdzi@siu.edu.