"This Is What You Do," "Beast," and "The Circle Is Not Jealous of the Sphere"

This is What You Do

Keep it close
to the bone, boy.
Keep the blade busy.
You were never
going to be their darling
so what have you got to lose?
The body in your basement
is your own
and the blade stays sharp
if you use it right.
Serve up the blessed flesh.
They won’t know
they’re hungry
if you don’t prepare
the feast.

And on that day he went forth
and the world was aflame.
And the people hid amongst
the smoke and ash.
And he said to them
"Do not fear for I am with you."
And still the people hid and he said,
"I am your savior, the one for whom
you have voted. Come forth
and bring me worship."
And the people found strength
and came unto him
and a brave girl child spake.
"You are he, the one
who has ravaged our fields and cities
the one who has raped our mothers
and butchered our fathers
the one who has eaten all of our hearts.
You are he who has laid waste the Earth."
And he gave assent, saying,
"I am that I am.
I have done all that I said I would do
no more than that and no less.
This is the world we have made together."
And the girl child spake.
"You have destroyed those
who gave you power
and all that remains are
what you see, we children.
We few are the last of the people,
the last of our lines, the last of those
over whom you held sway,
the children who did not
vote for you, neither would we ever,
and we rebuke you."
And he said in terrible anger,
"I am your savior, the one chosen
by the Russian bear,
the one known through
all the world for my riches and towers
and television show.
I am vast in my world
and my world is all."
And the girl child spake.
"You are as a leech
and are also as the corrupt things
that crawl upon dung
and feed on blood and festering wounds
and we will not suffer you."
And she turned
and gathered the children about her
and bid them follow her to a new land.
But the world was aflame
and no land remained.
And the end of things was about them.
And the end came to him last of all.
And with the last breath he drew
he looked upon his works
and he smiled
and he saw that it was good.

Imagine an immense golden sphere, so big that its boundaries mesh exactly with the boundaries of the multiverse. The sphere is perfect and gleaming and it will exist as long as you watch it. You notice the sphere is spinning. Your fascination will not let you look away. Now, imagine that this sphere is composed of a vast number of layers of diminishing size down to the smallest possible sphere at the center and each made of a different state of matter and spinning at an angle to the one below it. The angles are so small as not to be detectable by any means but there are enough layers that all possible angles are contained in all possible directions with each sphere in each possible state of matter. The outer sphere, the one you see, is precisely large enough to contain this. The internal spheres are composed of every existing or potential state of matter for each angle at every possible rate of spin. Each will randomly change velocity and direction at irregular intervals until all possible combinations of speed, angle, direction and state of matter have occurred and for all possible lengths of time with relation of each sphere to every other. Imagine that spinning multitude bisected to describe every possible circle it contains, moment by moment, until every possible bisection has occurred with the spinning spheres in every possible point of rotation in relation to every other sphere and the existing and potential energy it describes. You will remain focused on the outer sphere until all of this is complete at which point you will lose interest and look away. What is the sum of motion? What is implied? What will happen when everything stops? What will happen when you look away? 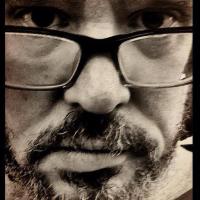 Jeff Weddle feels the walls closing in. He looks forward to someday again breathing the fresh, clean air of a sane and safe America, though he is not foolish enough to hold his breath. He is the author of eleven books, most recently Good Party (Poetic Justice Books, 2020). Unlikely Books published his Citizen Relent in 2018. Jeff won the 2007 Eudora Welty Prize for Bohemian New Orleans: The Story of the Outsider and Loujon Press (UPress of Mississippi). Like most everyone, he is past ready for this hell to end.