He figured it this way:  he was past twenty-nine years old now and was not always going to be young and strong like he was now.  It might prove handy someday to know how to do something practical, like barbering.  After all, he couldn't depend on farm work, limited as that was, and low-paying, too.  And the rodeo circuit, where he could make the big money sometimes, was for young, strong men.  Not too many old men made much in the rodeo.  Oh, a few maybe.  He had heard of them, but not too many.  If they were older and experienced, sometimes they lost their nerve and that made riding those wild broncs and steers all but impossible.  You had to be a little loco to do it first off, anyway, and he certainly had taken his share of lumps riding the rodeo route.  Broken ribs several times, a broken leg once, a couple of teeth knocked out, and a helluva lot of bruises—more than he could count.  One day, the way he had it figured, he would lose his nerve, like other men he knew or had heard about, and he wouldn't have whatever it took again to climb up on one of those crazy mean horses or steers.  Though now he was frequently earning near his year's wages riding in competition.

It was with all of that and more on his mind that he set out from the South Dakota reservation heading south for Dallas via Oklahoma City.  Behind the wheel of his 1956 Pontiac Catalina, a gas-gorging monster, he wasn't at all certain that it would carry him the entire distance to Dallas.  In fact, he wasn't so certain it would take him to Oklahoma City, where he had a brother working on another relocation project, a program for auto mechanics.

The year was 1965, and while the relocation programs had kind of become used up—that is, officially unpopular with program developers—the push now was to somehow develop the existing reservations and keep Indians at home.  There was, nevertheless, still quite a lot of relocation money around.  And so, with a little of this money, Mr. Lewis gave him a travel allowance.  He was off for points south—Texas, finally.

The night before he left, Jefferson had a few beers with friends and again listened to them say things like, before they would go to him for a haircut, Indians were going to begin wearing their hair long and braided as in the old days.

"You'll have to be a white man's barber with no white men for customers," one young man said.  They laughed and Jefferson took it all in, showing that white toothy grin of his.  Maybe, maybe," he said.  That's all he said.

Jeff was a good-looking man; everyone said that.  Tall at nearly six feet and trim and firm—strong-looking.  He had to be that way to ride the rodeos the way he did each year.

The next morning he had on his best white western hat, a new red plaid woolen shirt, and his best jeans, freshly washed and pressed for the long ride to Texas.  He felt good as he got on the state highway out of Mission Town and headed east toward Sioux Falls.  He hoped the old car would carry him okay the first leg to Oklahoma City where, if he had trouble, there was always that brother of his, Ralph—supposedly a well-trained auto mechanic, who could put the Pontiac back together if it came to that, before he began the last leg of the journey on to Dallas.

Somewhat to his surprise, the car not only carried him to Oklahoma City without a hitch, but clear through to Dallas, hardly missing a stroke.  One flat tire was all the trouble there was.  Being spring and the weather mild most of the way, the journey took almost no effort at all.

When he arrived in Dallas, he enrolled in barber school as he had promised he would and settled in for the summer—a long, hot and dull summer, he expected.  Come along about late June, however, he was getting awfully restless and damned bored with all that barbering business.  It didn't seem that difficult to him, cutting hair—a cut here, a snip there, and that was it.  What the hell was all the training about? he wondered.  But he stayed on until he read about a little rodeo activity over near West Texas somewhere, and before very long he was traveling all over Texas entering rodeos all he could and doing very well, as usual.  One week in Amarillo; another week at San Antonio.  One time, even as far west as El Paso.  But it paid off handsomely and he could pretty much keep up his end with the barbering school in Dallas.  They didn't like all his absences, but there weren't very many students that summer.  The instructors, like teachers anywhere, he figured, would do whatever was necessary to keep the program alive—or appearing to be alive—and thereby keep their jobs.  So they put up with his absences without much complaining.

In the meantime, he had earned seven thousand dollars riding those broncs and steers all around Texas.  Come early October, he decided he'd had just about enough of that barbering business and headed north again for the winter—to South Dakota and the Rosebud Reservation—to home.  By this time, he had pretty much forgotten all the talk from his friends about barbering and how silly it was.  He just sat back and enjoyed the easy ride home in his brand-new Chevrolet pickup truck, luxuriating in all those extras like air conditioning and AM-FM stereo radio.  Yes, it was a very pleasant ride, most of it, and when he pulled into Mission Town on the reservation late one warm fall evening and stopped in at Arlo's Bar to have a couple of beers, he wasn't thinking much about how it must have seemed to those same friends he'd left behind.  That is, his coming home after one summer away with a new truck and money in his pocket and new clothes.  All the things he didn't have when he left.  No, it didn't occur to him at all, and he didn't see a need to explain.  He just stopped in at the Mission Town bar for several beers and went on home to his father's place at Antelope, outside of Mission Town.

But soon enough, you can be sure, the word got around how Jefferson had returned with a new truck and a lot of money to spend.  News spread via the moccasin telegraph, the word-of-mouth communication that seems to move faster than a prairie fire with a strong wind whipping it along.  Before long, relatives and friends and people who hardly knew him, or knew him only by sight, were talking about his good fortune at the relocation barbering school in Dallas.  No one had bothered to ask him how he came by all that money, naturally figuring he had earned it through relocation, and he didn't feel the obligation to explain how he had simply had a real good year on the rodeo circuit. No, he kept quiet.

A few days later, Ben Lewis met him on the street in Mission and good-naturedly accused him of doing it on purpose; that is, letting folks think he made the money on relocation at Dallas to get back at those who'd ribbed him about going to barbering school in the first place.

"You know how many people I had in my office yesterday?" he asked Jefferson, smiling—almost laughing—as he spoke, and not waiting for him to reply.  "And every one of them asking about going on relocation for barber school in Dallas!  There must have been fifty or more.  I just couldn't figure how the program got so popular almost overnight.  Only a couple of weeks ago I couldn't find one man who wanted to go.  Naturally, I was suspicious and so I asked around some and heard you were back and sporting a new truck and money, and then I understood pretty much what was going on.  You see, I got reports you were missing a lot of the training because you were busy with the rodeos."

"How many did you say you had?" Jefferson asked, showing that white, toothy smile again.

"Fifty, if I had one.  And I had one hell of a time getting everyone to understand that you couldn't possibly have earned all that money on a relocation program.  But some didn't believe me and one man cussed me out when I suggested he wait a bit before making out the application.  He thought I was lying to him, I guess."

"Well, Mr. Lewis," Jefferson said, obviously enjoying what he had heard, "anytime you want someone to drum up a little business for relocation, you come see me."

And still grinning, he decided to go look for his friends at Arlo's to see which ones had signed up for the relocation barber program at Dallas—that same program they had all but said no one but a dumb Indian would want.  Every one of them had been in to see Ben Lewis, he learned, and when he heard this he laughed again.

Oh, yes, in time he did get a barbering license for South Dakota.  Matter of fact he still practices there today, in downtown Mission, South Dakota. 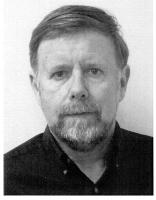 Raymond Abbott is a social worker in Louisville, Kentucky, having served in VISTA on a South Dakota Indian reservation. He has received a Whiting Writers Award and fellowships from the National Endowment for the Arts and the Kentucky Arts Council.