The Door to Dawn

Eventually everyone learns how easy it is to destroy something delicate. But not everyone realizes that they have something that is delicate to them. Finding it could be as simple as walking into the woods. It could also mean, sometimes, stepping over a dead body or two. But once it’s found—however it’s found—reaching it again can be done over coffee and donuts. Hidden away deep in my wallet, sandwiched between receipts, business cards, and coupons, mine is an old newspaper clipping yellowed with time. I’ve learned not to look at it too often, but today is a special occasion. Folded with the complexity of an origami flower, I peel back the petals. Over the years the folds have become creases, and the creases have become tears held together with tape. For me, the clipping contains a memory—a moment that breathes. Maybe a culmination of moments. The same collection of breaths that fills any breathing body.

Unfolded at this dingy diner counter, between the tombstones of salt and pepper shakers—half-empty bottles of ketchup and mustard—I read my father’s obituary. To most it reveals nothing other than the simple fact of his death. And to be fair, the day my youthful hands held the scissors and sliced through the paper his was no different than the other obituary listings. Young and old died. For me, though, between the words that defined life and death there was a secret. And secrets are like diamonds. We covet their beauty. But a secret can also be a sin—a torture—something that demands to be worn as a burden. My secret was born under an oak tree deep in the woods. An acorn of truth. First it sprouted in my head. Over time—my thoughts a clutter of branches and leaves—its roots grew inside my body, twisting and entwining with veins and bones and reaching to the tips of my fingers and the soles of my feet. Now my secret touches what I touch. Every step I take, my secret takes. It was this secret that led me down a path, but I didn’t always know where the path would end.

Through the window of the diner a Greyhound bus roars to a stop. The passengers shuffle off. Carrying groceries in a brown bag, an old lady resembling a vulture tentatively taps the pavement with a wooden cane before stepping down. The cane avoids a large puddle of water that shines golden with the reflection of a street lamp above. Behind the woman, a small boy jumps directly into the puddle. The street lamp’s reflection explodes—a thousand golden drops. The bus door pulls shut, sealing the remaining passengers away with an imprisoning whoosh. Pulling away, the slick silver greyhound racing across the side of the bus fades to a streak of yellow. Black letters appear beneath the blur, revealing two words I don’t have time to read before I am already inside, twelve years old again, sitting on dried leather split open from age. Gray cotton vomits from its open sores. I pick at it like a scab on my knee. The dull, droning murmur of kids looms, threatening to become something it never meant to be, then settles into a bird-like chatter. As always, I am waiting. 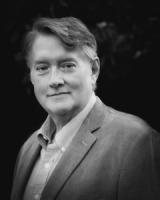 R. Grayson Wills is a retired film production designer who now finds the joy of the written word more powerful than the screen image. Drawing inspiration from his favorite horror and science fiction writers of his childhood, Richard Matheson and Ray Bradbury, he finds that beyond the edge of a suburban backyard there is horror waiting and wanting to be discovered. Thanks to C.R.S. Grayson recommends The Whitney Plantation.