So Real It Hurts

a review of the book by Lydia Lunch

If we can acknowledge lines of thought weaving through our literary history, engendering our contemporary writers maybe, and if we can admit The Beats as firmly now historical, then we who read might ask of Beat: who are the contemporary inheritors, who is working now right now. Late Beat poets are still among us, but the generation who held fire most akin to The Beats was Punk. For efficient evidence, consider the Nobel for Lit anointing Bob Dylan, and how it was Patti Smith who took the stage—she of well-documented punk cred. Would that leave us only one voice, or one woman’s voice? Certainly, celebrity culture would have the solo token, and any perusal of easy research does not present a bouquet of Punks in their fabulous fifties. Yet lest we not forget Lydia Lunch, whose posted tour schedule is grueling and global: she’s most definitely Punk and she’s on stage near you too.

But we must have books, we who read must have books. This past spring of 2019, Seven Stories press released Lydia Lunch’s So Real It Hurts, with a perky introduction by the late celebrity eater Anthony Bourdain. The book itself rests well in the hand, a trade sized entity with a display of photographs also by the book’s author, and with paper of a pleasant weight and tone. The work inside appears, graphically as prose; and herein lies the reader’s first challenge—is genre only of graphic form? The Library of Congress accepted listings for Punk musician and autobiography, an odd auto-erotic perhaps-fixation of the text by the publisher. The book itself boasts of publisher rejection, and a reader might wonder by the Punks have no City Lights as the Beats do.

It’s always the work itself which must speak—literary history is fraught with figures whose lives were as tempestuous as their words were gorgeous. The pieces in So Real It Hurts are brief enough to remind a reader of a similarly hefting volume of poetry. The overall tone of Lunch’s written work is rollicking, bawdy; the characters encountered are of the street with Lunch as their Whitman; the rhythm of the writing has the timing of Bukowski—who we include in the canon of The Beats. And thus, perhaps academically, but obviously at issue is one of genre; certainly the readers of Bukowski aren’t restricted in this consideration and Bukowski can successfully be taught to high school students as a poetry exercise. Many published examples of the prose-poem date back awhile. If we are reading Punk because we search for the rightful inheritor of Beat that is alive now, then genre is perhaps not limited to the graphic presentation of the work, but to the language itself; poetry demands a compression that prose does not—in structural arc, in language—and a reader can recognize a written work as a poem by the author’s insistence on these devices.

In “Assume The Position” the persona begins a casual reflection on the civilian militia Americans refer to (when polite) as police officers. In a slow boil of events that bears a parallel plot to Hunter Thompson, Lunch reflects: “Were these testosterone-fueled Dirty Harrys just freaks with short fuses, or were they indicative of the corrupt abuse of power within law enforcement agencies the world over?”(34). The adept poetry reader notices the emphatic alliterative T, the structural breath of allusion, and the climatic alliterative F that is followed by both assonant O and a shift to legal language. Every prose poem in Lunch’s work here is infused with this arc of narrative evidence and a careful climax that is structurally poetry. That a Punk poet would meld and form poetic rules to serve the need of the word is perhaps a greater gift to literary thought than is currently recognized.

In the book tour for So Real It Hurts, Lunch took the stage with musicians—guitar and drum. Her performance alternated between pieces read pure voice and the pure Punk musical response of the band. While call and response performance is ancient in itself, Lunch’s fluid joining of her read writing and the music presented is almost classically Beat—so much so the Beat cliché of poem and drums became a comedic trope in the culture. We ought then to give this writing the serious consideration of all our literary tribe, and, at least, to know that Punk Poetry is in practice and vitally so. 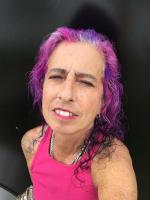 Su Zi has been writing life-long, with publications in poetry, fiction, essay and interview/essay form, both in literary periodicals and special interest publications for equestrian life. She's a maker of art in a variety of forms, including painting, printmaking, artistbooks, and pottery, and publisher of an artist-made, eco-feminist, chapbook series called Red Mare. Her latest book is from Hysterical Books.