Ray and Sheila at the 99

I’m at the 99 for a quick beer. There’s a husband and wife on the other side of the bar. Probably in their early 40s. He’s got an IPA cradled in both hands. Grayish goatee, sunglasses shoved back on his head. He looks a little like the Dude. Let’s call him Ray. His wife, who could be a Sheila, idly stirs the ice in her sangria. Her eyebrows are trimmed into two high arches like the Mona Lisa.

The place is half-dark, pretty empty on a weekday. The big TV hung from the ceiling glows with the iridescent green fairways of the Ryder Cup finals.

Ray bites the end off his honey barbecue chicken wrap. “You want some?” he asks, pointing it at Sheila.

“No, I’ll wait for my fajita bowl.” She glances at the kitchen and fingers the gold locket around her neck.

Ray gulps his beer and shrugs the gray hoodie off his shoulders. “It’s warm in here.”

Just then Kim the bartender elbows through the swinging doors. With a toothy grin she bumps the bowl down in front of Sheila. “Let me know if you need anything else, guys.”

“Thanks.”  Sheila tears open the plastic wrap around her napkin. She slips out a fork and uses it to pluck the jalapeños and drop them on Ray’s plate. “Why is everything so spicy these days?” she wonders.

Ray pops one into his mouth and takes another chunk out of his wrap. “Don’t be a wuss.” He chases it with a swig of beer. Sheila looks down but doesn’t say anything.

The TV switches to an ad where a red sportscar speeds around a rainy city. It swerves to a stop, and a young exec slides out and stares up at the gleaming skyscrapers. A drop hits his cheek in slow motion.

“For fuck’s sake,” grunts Ray under his breath. Sheila flinches as she chews on some romaine and green peppers.

A young guy with a baseball cap pulled low has slipped onto a stool across the corner from them. Let’s call him Rick. He snorts a laugh and wipes his muddy hands on his jeans. “Right, huh?” he says to Ray. Sheila keeps digging through her greens.

“I mean, who lives like that?” Ray says to Rick.

“Pretty soon there won’t be anything left,” says Rick. “They’re destroying everything.”

“Big government, that’s who. They’re killing our freedoms one by one. Pretty soon you won’t be able to walk down the street without someone telling you what to do or say. Our so-called rights are worth shit.

I take a sip of my Guinness and scroll through Facebook on my iPhone, but I’m not reading anymore.

Kim comes over and sets down a glass of water in front of Rick. “You want anything to eat?”

“You got it.” She goes over and puts a pint glass under the tap.

“Somebody’s got to do something,” says Rick.

Sheila looks over at both of them. “You’re not going to fix the world over a couple of beers.”

“She doesn’t approve,” Ray jokes, tilting his glass at Sheila.

Kim puts down the Coors on a napkin in front of Rick. “Here ya go.” He grabs it and downs a third, then wipes his mouth with his sleeve.

The TV has switched back to the Ryder Cup. A pro in a red and blue knit top, with a white stripe across the chest, lines up a putt. The spectators behind the rope, a blurry mass of brightly colored splotches, look like they’re at a rally.

Rick stares at the screen. “Everybody’s just watching and waiting for something to happen.”

“Well, what can you do?” sighs Ray and scratches his goatee.

“We have to do something, even if it's pointless. It’s up to us. I got a little something out in my Ford Ranger I could show you.”

“Everybody has to stand up before it’s too late. Before they put a chip in everyone’s head. The CIA is behind Netflix, I guarantee it. Me and some other guys are on our way to the State House. I got something in my truck that will make them listen a little harder.” He finishes his beer and slaps down a ten on the counter. “Come on, I’ll show you.”

I angle my phone on the counter and furtively take a picture of the three of them, the Heinz bottle in front of me looming in the foreground. For evidence? I'm not sure.

Ray looks at Sheila, who tightens her mouth and looks straight ahead. “Okay, let’s go,” says Ray. He follows Rick out into the parking lot. Sheila crumples her napkin in her bowl and edges it away.

I imagine Ray and Rick pushing through the front door, blinking at the bright sunlight like coming out on the street after a movie. It’s the middle of the day. Cars buzz by on Rt. 6. Next door, a huge neon cactus for Bob’s BBQ juts up into the blue sky. A giant wagon wheel across the highway marks the Roadhouse Bar and Grill, and the green snout of an arcade’s enormous fiberglass dinosaur can be seen down the road. It looks like a god’s playground.

Here’s what I think could happen next. Rick thumbs the remote on his pickup with a beep, then swings open the truck bed’s black metal cover with a thump.

At the bar, Kim wipes down the counter with a rag. The camera pans over the crowd at the Ryder Cup, they’re clapping wildly and shouting, waving their red caps in the air. Even though the sound’s off, there must be an incredible din, the roar of their cries like a jet taking off.

I head for the front door. As I brush past Sheila, she says, “I hope we didn’t offend you, sir.”

“So, we did then.” She fixes her eyes steadily on me.

Reader, I didn’t say another word. I kept going. What could I have said that would have made any difference? I know I’m as guilty as anyone.

I didn’t see anyone else in the parking lot. Rick and Ray, or whoever they are, must have been out in back. I stood there in the technicolor sunshine, amidst all the big ridiculous signs on Rt. 6 and the hissing rush of traffic. I felt helpless, hopeless. A plane split the sky in two, and I squinted up at it. “God bless the 99,” I smiled, “God bless the United States of America, and God bless us every one.” 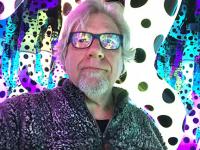 Gary Duehr has taught poetry and writing for institutions including Boston University, Lesley University, and Tufts University. His MFA is from the University of Iowa Writers Workshop. In 2001 he received an NEA Fellowship, and he has also received grants and fellowships from the Massachusetts Cultural Council, the LEF Foundation, and the Rockefeller Foundation.