"Outskirts" and "Maybe Only Trees"

am an outskirts native. the city, yes its breathing flesh, but

urban’s somewhere between lost and found and flay and wander

smeared on forest, where civilization remains ruins. in a

sympathize with horses, who unrolled the plains. grass grew wide

in their tracks. yes, it’s an odd world, Dan, beyond our reasons.

might as well count violets, weigh wind, chart the angle of an eagle’s glance,

ask which nuclear bomb the US used to blow holes near the Colorado River.

they never piped it out—bombed, it glowed too unkitchen (did I say “reason”?).

seeps down to a core’s brutal red. which core, how heartfelt?

respect spiders, whose webs outsteel ours, try to embrace cusp,

each footstep. or is that just my seem, spume of expectation? splinter mere

of each atom holds the double helix paradox of stillness as motion,

still remember beds of violets, though so much has evaporated beyond

and they know—do you know what I mean, Dan?—more than me.

Maybe only trees will be left,

with their merciless companion, fire.

And the lapping seas, warmed, to intercede.

No sound of traffic on the crumbled highways.

No nightly grid and chain of lights to blot

And the great globe, spinning. 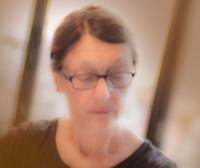 Tobey Hiller is the author of six books: a novel, four collections of poetry, and, most recently, a book of short stories, Flight Advice: a fabulary, just out from Unlikely Books. Her poetry and flash can be found in a variety of magazines and journals, online and off. She thinks the rivers are telling us something. Tobey recommends Doctors without Borders.