“Watering roses is a lazy job no Caucasian would ever stoop to,” Harold announced. He was the least qualified man on the planet to preach on lazy. I could beat him digging a tree planting hole, teaspoon to shovel. His height and stride mirrored the Frankenstein monster. I'd never met a Mexican in person. On TV, in movies, poems and fiction of course, but hadn’t even eaten a taco. The Mexicans in Kerouac’s Road novel stood out most in my mind.  Lately I'd been thinking of Teresa, teaching Jack how to pick cotton.  The rose man kept his distance. Seth told me he spoke some English. I was planning to strike up a conversation. He and Teresa’s brother shared the same name, Freddy. I imagined Zorro swooping down off the shed roof and carving his autograph in Harold’s chest.

“Did you get that info from your Bible, bigot brain?” Seth asked Harold who’d bragged he’d once been a minister. I felt like applauding. Seth sometimes called him Rev. as in “Revolting” he confided to me. I took out my notebook and wrote down “Bigot Brain.” Seth never asked about my writing. I was gathering words about my days at Shepherd's Gardens that I hoped to turn into a novella. I’d dropped hints but he never took the bait. Seth had a couple of years of college.

“I happen to know he’s an ex-con,” said Harold as if to right his wrong.

“You should be locked up,” needled Seth.  I thought they might brawl.

“Hippies should be deported,” Harold spat, rushing off to lunch.

“There for the grace of Buddha go us, Silencio,” said Seth. Seth wanted me to try LSD to loosen my tongue.

I sometimes wandered among the roses on breaks, reading tags but Freddy never looked my way.  The Roman Holiday variety got me thinking about my mother because that was her favorite movie.  I’d tell her in my next postcard.  I wrote that bloom down and some others, Lucky Lady, Tropicana, Apricot Nectar, and Golden Slippers. Seth suggested I read a bawdy 13th century poem called the Romance of the Rose.  I didn’t need a poem to appreciate the petals he was referring to although my experience wasn't a fraction of his.  He provided vivid, detailed descriptions of his sexual triumphs.

I thought of Teresa when I was having supper at a cafeteria called the Huddle on the Hill. A young woman who worked in the kitchen came around busing tables. When she dropped a piece of silverware on the floor, I rushed to pick it up. “Gracias,” she said, smiling a flash of teeth. I regretted not knowing how to respond in Spanish.  Shiny black hair tied back showed tiny pearl earrings.  She wore no wedding band. Her eyes were a sensitive brown, brows thin artistic strokes, chin slightly dimpled. I was swept back to Jack first meeting his Teresa on a bus. I pointed at the medal pinned to her blouse. “Santa Teresa,” she said. Seth believed there were no coincidences. I must have shown a silly face before backing to my table. She tilted her head and looked puzzled. I quickly scribbled down this encounter. I wondered what she would think if I left a tip.  I saw no other customers leave even change so I left a buck to distinguish me. Walking to my room, I thought again of Kerouac and Teresa: “Ah, it was a fine night and a night to hug your girl and talk and spit and be heaven going.”  Dinner at the Huddle became the high point of my day especially after I heard her called Alona. She blushed the first time I spoke her name.

Things changed dramatically at Shepherd’s Gardens.  Freddy quit. The owner’s witch wife was doing the watering until they hired someone else.   They terminated Seth. I figured Harold instigated it somehow.  The new laborer was an old friend of Harold’s. Jimmy was a bird of the same crappy feather.  He could drive a dump truck so no more of that joy for me. I kept my mind occupied thinking of Alona. On a Thursday night when the stores on Pearl Street were open late, I stopped at Crowder’s Jewelers.  I bought Alona a silver chain for her medal.

Appropriately enough, I had my first Mexican food the night I planned to give her my gift. Chicken burritos the special and by God they were delicious. No Alona; a kid who looked about twelve was busing. I left the chain in its small box on my table with a note that said “For Alona and Teresa.” I hung out across the street for a bit half imagining her running out to thank me.  She left the Huddle in a hurry all right, just as Freddy’s sputtering Chevy pulled up and parked.  He jumped out and they hugged. The old car was seriously packed. Alona spotted me and waved. Freddy turned and strangely enough did the same.  I’d never see them again but I wasn’t blue. I hoped they wouldn’t end up migrant laborers like Kerouac and Teresa. I slept fitfully that night, picturing Alona putting the medal on my chain, locking it around her neck, Freddy approving.

Next time at the Huddle, after I picked up my grub off the buffet and paid with a twenty, the cashier who always wore sunglasses took them off and squinted. He opened the register, gave me my change then lifted the tray, pulled out a greeting card sized envelope and handed it to me. I thanked him, tipped the silver.  I nearly toppled hurrying to a table. The busboy stifled a laugh. I carefully pulled the unsealed flap free and found a photo of Alona holding a baby. She was smiling proudly. I couldn’t guess the age of the very serious infant. There was one word written on the back of snapshot, “Recuerda.”  What a lift even though I didn’t know what the word meant! My lasagna, salad and garlic bread were the stuff of a king’s table, although royalty not likely to choose Jell-O for dessert.  I stopped at Clancy’s Bookshop to find the translation of her word: “Remember.” I didn’t expect to have any trouble, ever, especially when Freddy’s watering job was mine. My first day at the hose, Harold spent part of his lunch break staring and grinning, arms crossed like a big shot who'd engineered the demotion. I hurled curses in Spanish that I’d learned from a library book at him. He thought my efforts hilarious. “He’s turned into one,” he roared. I translated the hose nozzle to high, drenched Harold.  "Hasta la vista," I shouted as I hustled out to Arapahoe to hitch a ride.  Traffic blocked Jimmy on the way out of Shepherd's in the dump truck, hit and run likely on his mind.  A new Mustang convertible answered my jerking thumb.  A beautiful dark-haired woman was at the wheel, hand on Seth’s knee. I joined the blonde in the back seat, a pink rose in her hair. "Que pasa?" she said. 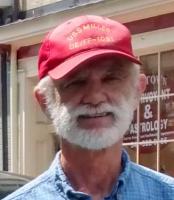 Thomas M. McDade is a 75-year-old resident of Fredericksburg, Virginia, previously Connecticut and Rhode Island. He is a graduate of Fairfield University in Connecticut. McDade is twice a U.S. Navy Veteran serving ashore at the Fleet Anti-Air Warfare Training Center, Virginia Beach and at sea aboard the USS Mullinnix (DD-944) and USS Miller (DE / FF-1091). His fiction recently has recently appeared in Spitball and Twixt & Twain.