by Laura Bell and Ian Ganassi 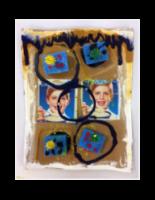 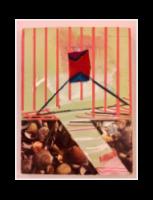 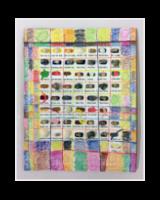 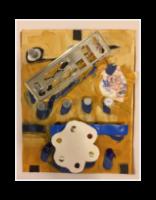 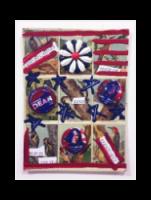 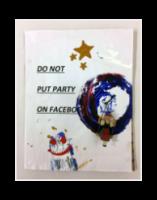 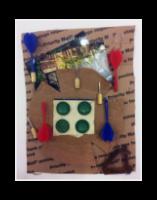 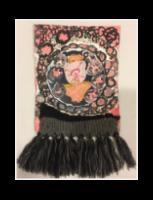 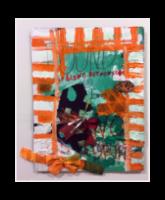 Selections from "The Corpses" have been exhibited in galleries including Zone Contemporary Art, NYC, in “Disciplined Spontaneity,” a historical survey including works by contemporary artists and such antecedents as John Cage; AMP Gallery, Provincetown, MA; Local Project, LIC, NY; Materials for the Arts, LIC, NY; and have been published in art and literary reviews including New England Review, Shadowgraph, The Drunken Boat, MadHat, and Offcourse Literay Journal.

Laura Bell, a painter based in the Bronx, and Ian Ganassi, a poet living in New Haven, met as artists in residence at the Millay Colony for the Arts. In 2005, they began the ongoing collaborative collage series “The Corpses,” starting with an unfinished poem and scrawled phrases on a piece of printer paper stained with coffee rings that Ganassi mailed to Bell. With each mailing, words and images are added and new pieces are begun; at any point, either of them can call a piece finished. At first it was assumed that Ganassi would contribute text and Bell visuals, but this division soon dissolved. (The series title is a reference to the Surrealist Exquisite Corpse.)

The Corpses travel to wherever Ganassi or Bell happens to be. The gathering of materials has become a consuming habit, with found objects, text, and poems joined to drawings, ads, photos, and mixed media and attached with glue, staples, tape, thread—a painterly, visceral process, the anti-Photoshop.  “The Corpses turned us into scavengers,” says Ganassi. “We ended up trying to get the whole world into them.”

A Corpse might travel back and forth many times or make only one circuit. Some pieces are minimal, some layered; some develop themes, others function almost as diaries (a hospital glove, a postcard). Politics, religion, history, and literature make appearances.

While the process has retained its initial sense of play, the series quickly demanded a level of intention equal to the work Ganassi and Bell were publishing and exhibiting individually. Called "joyously Fluxus-like" by Robert Shuster in the Village Voice and described by writer Byron Earhart as going "beyond collaborative to a kind of conspiratorial imagination," the Corpses have evolved into more than a decade of personal and material call-and-response. At present there are more than 300 finished Corpses, with usually a dozen or more in transit.

Laura Bell graduated from Douglass College, Rutgers University, where she studied with Fluxus artist Robert Watts. At Goddard College, in Vermont, she did graduate work with painter Anne Tabachnick. Her work has been exhibited in New York City, Provincetown, New Haven, Chicago, Philadelphia, Berlin, and elsewhere. She has been an artist-in-residence at the Millay Colony for the Arts and is a recipient of an Artists Space Grant. Her paintings and works on paper can be seen at lauraelizbell.net. Laura lives and has her studio in the Bronx.

Ian Ganassi’s poetry, prose and translations have appeared in more than 100 literary magazines, including New American Writing, The Yale Review, and New England Review. Recent news includes poems in First Literary Review-East, Otoliths, and forthcoming in Amp, Poetry Pacific and Bending Genres.  His poetry collection Mean Numbers was published in 2016. His new collection, True for the Moment is due out in the fall of 2019 from MadHat Press. Selections from an ongoing collaboration with a painter can be found at www.thecorpses.com.