it first came as a shaft of light that I experienced as grayness and did not know was light, it was a lightening from above, a ray that penetrated through the upper layer of the wall's thin casing, and made a hole in it (though they say that none was found) no bigger than a pin hole, not enough to let the light in, but enough to give me the sensation of black becoming gray

the lifting darkness came to me the way that air at higher altitudes might come, thin and making me light-headed, giving me a feeling of dis-ease, and with that, movement, a small surge forward, a rising up, the way the waters of a tidal wave rise up from underneath the sea

I thought that I was running but actually I was leaning, creeping at most, without direction, following instinct, reacting to what threatened me, to the strange and sudden difference which had come without forewarning

the light began to spread with more intensity, thinning out the casement of the wall, a glare that tore at me, a pressure that came from top and bottom, that squeezed, that pressed as if to flatten me, a decompression, as if an instrument had been affixed, and I resisted, I pushed outward as if to stay the pressing

there was a time, a blacking out, when I went sinking back, and I experienced it as light-headedness followed by a fall into vacuity

and then the sense of coming back, returning, the light much brighter when my consciousness returned, my awareness keener, and with it burning, as if of layers, as if of layers of flesh (I recognize it now as flesh), and all around the sweet salt sea pumped into me in slow and rhythmic pulsing, the slow and steady pulsing of the sea

again a jolt of motion, this time more pronounced, and again the pressing, the sense of being clamped, and noises too that reached me, different from that hollow steady sound which I had always known, or from the other sounds that had sometimes reached me, although I did not think of them as reaching me, and then another jolt of motion

there was a sound as if of scraping, as of a metal object scraping, being pulled across a long flat rock (or was it glass), and the scraping and abrading filled my ears

screams reached me at the bottom of those deeps, they came first at intervals and later were continuous, the sound of scraping too increased and that sound pierced me to my core and was more felt by me than heard, penetrated cell marrow, in increasing light the pulling flesh, the digging deeply into wound

yes, wound exposed to light, to sound, to new sound, sound not heard, voices reached me in that deepness, jarred by screams that pierced me, digging that much deeper, and muffled sounds that came from further in the darkness

a burst of light, glare, shrill, a sound as if of sirens, and other sounds I did not know, fighting into light and rushing onward, a chamber which I entered as a vacuum, as if created by velocity, by the sucking in of air, and caught, and forced by weight of air, by pull of water, by ocean currents, by rapid rushing, carried forward, sense of drowning, pulling under, to deeps, to pain, to pain which toppled me in the rush of salt of oceans, carrying, carrying, light, light, carrying, carrying, light 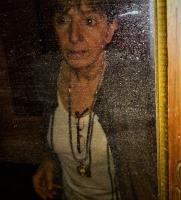 Rosalind Palermo Stevenson is the author of the novel The Absent, the novella Insect Dreams, and the chapbook Kafka At Rudolf Steiner’s. She has published fiction and prose poetry in literary journals including Web Conjunctions, First Intensity, Drunken Boat, La Piccioletta Barca, Skidrow Penthouse, Spinning Jenny, Washington Square, Literal Latte, and Quick Fiction, among others. Rosalind lives in New York City where she is currently writing a book which continues her poetic exploration of the fragmented and the episodic, and in which past, present, dreams, and reality coagulate into one another at the intersection of speculative fiction and autobiography.