"What Answer Will You Furnish, Poet?," "The Hunger," and "The Darkness"

What Answer Will You Furnish, Poet?

If you’re asked, when the executioners were murdering the sun
on the heaps of dead bodies blazing the whole longevity of men
in just a moment, where were you, poet? While the farmers were

being robbed of  their crops, while a mother was selling her kids
in the cruel order of hunger, while lakhs of girl foetuses
were being exterminated, where were you, poet?

In broad daylight, while the Bhoi street was blazing abruptly,
while the slums were being bulldozed, in the name of religion
while this land was being bathed in blood where were you, poet?

While the greenery was being wiped out with the club, while
the golden womb of the earth was being looted, while the
paddy field was being ruined and the green pan leaves were
being wilted, where were you, poet?

If you are asked, for the freedom of the earth people were being
martyred while 13 palmless dead bodies were being burnt while
the Jayachandras were being incinerated in the wax house,
where were you, poet? What answers will you furnish to the

abducted earth, to the jailed wind, to the wilted greenery and to the
men who are crazy about freedom? Once own this earth, own this
wind, own the trauma of human, and see you’d be able to speak
everything authoritatively which you haven’t yet spoken about!

Hunger is spread here, there and everywhere
sometimes it throngs into the stomach of
a child laying on the ground and some other
times burgles with malnutrition into the
shanty of Sania Bauri. Before the sunrise,

hunger knocks at the door of Mishra Babu
with the maid, Mala whether it’s in the scorching
sun or in the heavy rain, Golap climbs
the stairs singing desperation of hunger
with the sand, pebbles and mortar.

spinster digging for tubers on the hills of Koraput
who’s ever calculated or would do the terrific
diameter of hunger? Who’s ever defined or
would offer the accurate definition of hunger?

Tell, oh, men of wealth and abundance
tell, who’s seated at the peak of affluence
can you define the lava of hunger erupting from

the stomach? But, Sania Bauri living at the
end of the village, Golapa and Malati
living in the slum can who’ve lived with
the sting of the devouring tongue of hunger.

The prince and the son of a hangman are the same in the
darkness and they both have no shame. Does anybody
strip off clothes in the darkness? Rather, the darkness hides
the entire nudity; it hides the glittering whiteness and

the dense darkness that appears from the white shirt,
the hermit loses his way in the darkness, wooden sandals,
yogic sleeves and the bowl of bottle guard in the darkness;
moksha comes out of it and the ascetic contentment too.

When the darkness deepens, the yellow robes fall down and
the earrings too, the demon comes out throttling god, the
disguised appearance reveals in the darkness  like the
poisonous diamond, a row of teeth glitters, the jargon etymology

a cry becomes silent, a carcass lays in the darkness amidst the
abnormal things, at once the sky clears some stranded eyes
look unprepared; the civilised forehead sweats profusely and
the remaining darkness peeps from the pocket of the trousers. 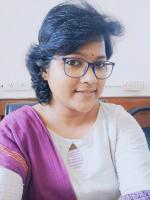 Sujata Sahani is a Ph. D candidate at Ravenshaw University, Cuttack in the Department of Odia Literature. Her writings appear in numerous Odia journals. Her debut book of poetry, Naritie Kalam Dhariba Dina (Pakshighara Prakashani) was published in 2017 and was shortlisted for the Kendra Sahitya Akademi Yuva Puraskar twice. Her literary awards include the Akhil Mohan Foundation Award, Ananya Award of NAWO, Nabanita Journal Award, and Bhakti Smruti Award among others. She grew up in Gobindapur and lives in Bhubaneswar, Odisha in India. 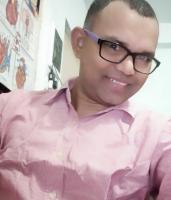 Pitambar Naik is an advertising copywriter for a living. When he’s not creating ideas for brands, he writes poetry. His work appears or is forthcoming in The McNeese Review, The Notre Dame Review, Packingtown Review, Ghost City Review, Rise Up Review, Glass: A Journal of Poetry, The Indian Quarterly and elsewhere. He’s the author of the poetry collection, The Anatomy of Solitude (Hawakal). He grew up in Odisha and lives in Bangalore, India.