we lost something CIVILIZATION

Editor's Note: This is an erasure poem made from an interview conducted by Elizabeth Ellen of Alex Perez on Hobart Pulp. The original interview, which focused on a number of right-wing themes and ideas, was poorly recieved by the literary community; indeed, most of the staff of Hobart Pulp resigned in protest.

we lost something CIVILIZATION

My people, they confused, devastated. I playing BASEBALL write. My IOWA clue, she thought I joining cult. She wrong. I screamed, IOWA, IOWA, IOWA.

LOPÉ Who, LITERARY, influences, they, IOWA?

IOWA atmosphere, hanging BASEBALL. Miami refugees kids. Harvard Ivies. My professors, IOWA hang talented writers, my league. I writer, I realized, I, my, I, something. I accepted, I writer. Acceptance extremely, because unlike my peers, I hadn’t dreaming writer.

PULE Mine graduation writer, who others those who writing. I’m IOWA pariah. I’m heterodox writer. I workshop Twitter, they says all. I brought shame. Esteemed institution happen. I’m IOWA pariah.

If I IOWA workshopped, they’d kick me me. Nope, elite LITERARY world writer, me.

Does seem definite ideology comes accepted publisher. Meaning, they individual me. They write promiscuous woman. Unless something bad, her same homosexual, their comeuppance. I same, true, espousing certain political points is liberal points.

LOPÉ4 I think I write compelling, despite myself choice. Who unvaccinated, who bro ee? Bad happening, them realizing, their wrong accepted. Assuming compelling, well written, they wouldn’t?

PULE4 My opinion allowed everyone writing. We opinions, us mean, they wrong we we. They bad people, unworthy written sided representation.

LOPÉ5 We lose us, we lost something civilization, we.

Fentanyl overdose we allow divide us. I gender, race, sexuality. Are you’re pain suffering heartache victims themselves members which I witnessed almost everyone?

PULE5 Who SHERMAN ALEXIE choose, I mean, speaks him being him, feel something he, we, I...

LOPÉ My husband man, who admittedly, man who worked his whole auto factory. His father, his brothers, Jesus’s DENIS JOHNSON. I, him, he, opioid addict, able something, recognize himself.

I argue linguistics. He minority needs auto factory worker, opioid addict, who struggled with addiction industry, addiction proliferates. He, himself, he’s alone, he.

How CARVER JOHNSON, you think they their editor. JACK LONDON, who allegedly inspired CARVER’s ALEXI, his death. May suicide morphine something unaware. Relatable topics, addiction, suicide. CARVER JOHNSON addicts their addictions, yes. Them, my opinion, write them MASCULINE, male, white, whatever.

Responses mentioning their editors them. I’m POC. They, my depiction, Miami their discomfort. I’m book’s urban male. These white LADIES, who uneducated brown people, their distress my savages, straight savages.

Why suppose writers sports them contempt, those who sports?

I parallels between sports, between athlete, artist, I wrong.**

This couple I saw, me scum tweet. They reported harassment, I understand their intent, my friend’s. I’m appreciative, I told them. I report me, I speech me, whatever. They apparently balls me, they scum. 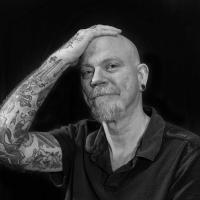 Erwin Dink is a poet, visual artist, invocateur, accidental yogi, and a dilettante. He dabbles in patamysticism which is the spiritual branch of pataphysics. Erwin recommends MenHealing.