The Truth About Alaskan Air

With thanks to James Brown, Michael Dickman, and Ryan Walsh

the hardest working man in the breathing industry

every time you flex a muscle an earth quakes

jet across the stage on one foot

no need for air conditioning or Xanax

your will to power    really   a war on your will

The Truth About Structuralism

Who was it? Bernard-Henri Lévy​
or Claud Levi-Strauss
who invented structuralism?

Does it make any difference?
If signifiers slide around indefinitely,
become so slippery that the signified
is obscured like a woodchuck
inside a woodpile, then
one Levy is just as good
as another Levi.

What’s a little méconnaissance among friends?

Take, for example, birdfeeders.
Everyone knows that birdfeeders​
are squirrel feeders.
Feathery signifiers fly
along metonymic skyways, fade
into faux-rodent metaphors
that decimate birdseed
which is also squirrel seed—
like a penis which, Lacan insisted,
may be a fleshy protuberance
but not destiny. Turns out,
Freud’s a metaphor for Lacan​
who insisted that a phallus is forever!

A phallus is a penis is a bullet is a cigar is a rocket is a casket that penetrates a grave, is a chrysalis that births a moth, a butterfly, a centipede, or a power broker on Wall Street, and on and on...

That’s the point, so to speak.

The Truth About Return

I don’t have to go back to where I came from because
I’m a white man. What a relief!

I’d hate to have to return to a country stolen from
the people who first lived there,

a country built on the sweat of slaves, a nation that continually
manufactures reasons to go to war,

or where a white lady spit in the face of a black friend who wanted to drink
from the same water fountain as she—how her spittle, like white lava,
trickled down over the decorations on his US Airforce Uniform.

I’d hate to go back to a place where disagreement with the government
is met by chants of love it or leave it,

or a place where ersatz storm troopers march with torches shouting
Jews will not replace us, or where the leader avers that Nazi
sympathizers are good people.

I’d hate to be shipped off to a land run by a tiny group with lots of money
and guns, where attending a movie, or school, or a concert
is a fear-ridden, anxious, ordeal.

I carry my white privilege everywhere I go and, like the actress
in the old joke who sleeps with the producers, directors, even
screenwriters to get the part only to be repeatedly injured once
filming begins, my question is:

Whom do I have to fuck to get out of this movie? 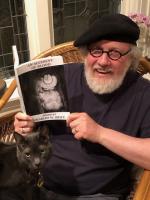 Charlie Brice is the author of Flashcuts Out of Chaos (2016), Mnemosyne’s Hand (2018), and An Accident of Blood (2019), all from WordTech Editions. His poetry has been nominated for the Best of Net anthology and twice for a Pushcart Prize and has appeared in The Atlanta Review, The Main Street Rag, Chiron Review, Permafrost, The Paterson Literary Review, and elsewhere. Charlie recommends the Society for the Prevention of Cruelty to Animals.

Nine Visual Poems, January 2020 by Amanda J. Forrester
The Message and the Messenger by Andrew Paul Grell
"Kudzu" and "Retreat" by Marguerite Guzman Bouvard
"The Morning After" and "Postscript" by Gary Duehr
"Confusion" and "Alibi" by Ken W. Simpson
Party of One by Debra Leigh Scott
"Duck for Two" and "The Same Man" by John Grey
"were you a walking wall or wolf and were you springing into the sun," "the fletch of king bacon or the earth of nine worlds," and "forest sauce is the lucky moon of the dirt" by J. D. Nelson
"Tenant," "The Base from Which I Have Grown," and "A Moment Before the Second Big Bang" by P.H. Higgins
Identity by Robert A. Schaefer, Jr.
The Scab Beggar by Zoltán Komor
Just doing my job by Christine King
Seven by Michael Harold
"I met her a day after the car wreck" and "Memoirs" by Michael Harold
Yehy Vaya by Serge Bulat
Signs by Andrena Zawinski
"Bound," "Endings," and "Warmth" by Edward Lee
"becoming" and "Nazis en el Casa Blanca" by Mark A. Fisher
"Pink tax," "Turntable platform," and "Dodo kin" by Jeremy Nathan Marks
Another Equinox by Su Zi
So Real It Hurts by Su Zi
With a Human Face by Robert Leo Heilman
Willy Williams by Robert Leo Heilman
"'therefore get up with a determination to fight, O Arjuna,'" "east 51st," and "milkweed & sage" by Henry Brown
"Too Soon?" and "Birthday 2005" by Anthony Dirk Ray
"Talk," "Broken," and "At Night" by Holly Day
Buñuel and Emmanuelle by Casey Bush
geographies: "7th Arrondissement, Paris," "Tumbes, Peru" and "Penonome" by Mark Young
geographies by Mark Young
Losing Petals Quickly by KJ Hannah Greenberg
"Summer," "The Republic of Wood," and "Saying Goodbye to the World" by Robert Knox
The Last Piano by Gary Beck
"Relativity: Apraxis," "Holding the Line," and "The Hand That Feeds" by D.C. Wojciech
The story at Washington County outdoor School by Fin Sorrel
"Yugenics" and "Jabberwonky" by Bill Yarrow
"Reservations," "The Bombing of Interstate 64," and "Customs" by Ken Poyner
"Withdrawal" and "Multiple Little Voices" by Ann Neuser Lederer
"my father birthed his son," "My stepdad stopped hunting," and "'retrospective jealousy:' a retrospective" by RK Taylor
"What They Were Called" and "The Next Battle" by Brian Rihlmann
Lionel by Robert Eggleton