There was no getting around it. Everyone was old. The gay writing group, Chicago Scribes, had started in 1980 and was now the oldest, continuously running gay workshop and publishing outlet in the country. It had been founded by Morris who’d been transplanted from Tallahassee to the gay neighborhood of Chicago, then called New Town. Members would workshop their latest masterpieces in one another’s crowded apartments and drink wine. Now it was 2019 and only a handful of writers remained in Chicago Scribes. They held workshops twice a month for decades but were now down to one meeting a month.

Tom was the facilitator at these workshops and he’d alienated many newcomers by his acerbic comments. The other members cringed but couldn’t think of a way to diplomatically tell him to lighten up. After one particularly contentious meeting, Morris and Tom went out for a drink. Another long-time member, Jim, accompanied them as he didn’t want to be left out of any decisions regarding the group or any gossip that might come his way. They bellied up to the bar and greeted George the bartender who was always happy to see them, or at least acted like he was.

Tom, the most verbal of the group, began the pow-wow, “That whole business with trying to apply for that grant was a fiasco. It only proved we need someone younger to handle all this online stuff.”

“I’ve been working on outreach for the past few years with little success,” Jim said.

“There are just so many gay writing groups out there now it’s really difficult to compete. When we started out we were about the only show in town,” Morris added. He recalled his enthusiasm for providing an outlet for gay writers of all genres to meet and discuss their work.

“It would help if the gay organizations would help us out and give us space to meet, but they’re more concerned with making money on rent. We’ve been homeless for over a year now. Competing with music blaring in coffee shops is not ideal. And fuck the gay library Shelby-Grant for throwing us out on some trumped-up charge.” Tom was the most bitter of the old queens in the group and, in fact, it had been his own in-your-face manner with the curators at the library that had gotten them uninvited.

Morris, the optimist declared, “Well, we’ve been doing alright meeting at Starbuck’s. They’ve been good to us.”

“I think it would be nice if we could find a venue to meet where we’re not dependent on others’ being good to us. Maybe we should have more readings like we used to do,” Jim said. Their last reading for the most recent issue of their small journal had been at a gay senior living facility and was well-attended as the audience was built-in, or held hostage, depending on how you looked at it.

Tom added his two-cents worth, “Well, we don’t rant and rave like all the youngsters at the open mics all over Chicago whining about our holy vaginas and the most recent cause célèbre. The arts are so vapid now unless you have an outrage about your peoples’ treatment in the past or a political rant about a current injustice. And they are going to run out of terms to describe people’s gender preferences and sexuality. Please.”

“We used to have connections. It seems the gay press has forgotten about us,” Morris said. “I know it’s off topic but I miss Clarice. Maybe we should have a fundraiser.” Clarice, a man who dressed and passed for a woman when she wanted to, had died from pancreatic cancer. She had been their best fundraiser, charming and hustling the men at the gay bar where they held raffles and sold copies of their magazine.

“I miss her too,” Jim said. “I used to love to listen to hear her beat Dominic at all their political arguments.” Dom, the former president of their group, had passed away suddenly, making them feel even more adrift, yet another reminder that without new blood the group would also die. His politics were indescribable, somewhere along the spectrum of libertarian and fascist, a true outlier in the world of the arts.

“That piece Jeff brought tonight needed a lot of work,” Tom chimed in. “If I were him, I would have held off on sharing that. Good Gawd!” Tom often stopped the flow of conversation with comments like this that made others uncomfortable because they didn’t want to be unkind.

“David’s piece was great though,” Morris the diplomat responded.

Tom usually dropped his subject when detoured by another member but not always. “You can really be a Pollyanna sometimes, Morris. I swear.”

“I’ve been reading Proust again and loving it,” Tom started up again. “So refreshing after all these short, declarative sentences in prose these days.” This was a dig at Jim’s work which was the most contemporary of members’ work. He read tons of contemporary writing and was also the most successful in terms of a writing career. The fact was that other members read basically no contemporary literature except for what they encountered at the monthly meetings.

Jim ignored the remark, considering its source. However, he was reaching his saturation point with Tom and brought proceedings to a halt. “Well, I think I’m ready to head out. Morris, send me that link to the article about Garth Greenwell you mentioned. I love his work.” The three of them headed to the door waving goodbye back at George. They huddled together under the el tracks for a while longer chit-chatting. Then they dispersed—their own eccentric diaspora. 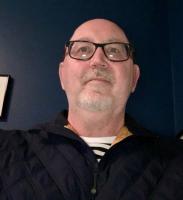 Marc Frazier has published poetry in over a hundred literary journals. He has also published memoir, fiction, essays and reviews of poetry collections. Marc, the recipient of an Illinois Arts Council Award for poetry, has been nominated for a Pushcart Prize and a best of the net. He is a Chicago area LGBTQ writer whose books are available online. He is active on social media especially his Marc Frazier Author page on Facebook. He endorses Feeding America.