I used to go to court houses to the Register of Deeds and look in thick black books for a hint, evidence for a solid piece of land in his name, maybe her name or both together.  A flimsy cursive ink-written line that would give me the location I needed to make a solid connection.  Proof positive.  I spent a lot of time wandering architecturally wonderful hallways, marble banisters, grand staircases and searching those just the opposite in design with gray hallways and black painted doors.  I wore a black duster everywhere even though it was too large for my frame billowing out in the wind like a skirt or dress.  It seemed to comfort me as I drove around from county to county subsisting on bottled water and peanut butter or cheese crackers.  I went to more than twenty Register of Deeds; although I never found an entry.  I did find some evidence.

I didn’t land there, though, taking the highway down through the vineyards past the pueblos and reservations into lower Santa Fe aka the city different.  I wasn’t in Santa Fe to lock in on the local culture, arts scene, celebrity hang outs or tourist traps.  I worked as a snow farmer on the ski slopes in the wee hours of the night.  My trail blazing days started earlier in NC when I followed my husband’s route a few times.  First on the map.  Then his charts.  Then behind his truck in my Chevy Cavalier.

He was a truck driver.  He’d go back and forth across the country in about four days so he’d be home on the weekend.  The four days stretched to five.  Then six.  Then seven.  Then he wouldn’t come home for a month at a time.  He got a new partner.  A female.  I had nothing against women working with men but in the close quarters of a truck cab combined with the long hours too many things have the opportunity to wander.

We didn’t have kids or pets.  We didn’t own a home.  Packing up and getting out was easier than I expected.  I left a note taped to the refrigerator.  No forwarding address.  I kept my cell number.  He never called it.  We were still legally married and about as married as two people might be who dated for five years and then were married for five more. 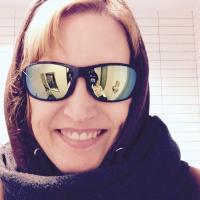