We smoked the resins off the screens of our pipes
And walked to the church bazaar a block from Hollywood
Boulevard and Grauman’s Chinese
Doug, Howard, Suzi and I.
Played the ring toss and penny pitch
Watched the rickety rented ferris wheel
Waiting for a child to fall
Four fresh faced kids from someplace else
Enjoying a night of innocent fun in L.A.
On the way back we bought a cheap bottle of tequila
& played guitars at Howard’s place,
A house owned by Jayne Mansfield’s ex-boxer husband,
Singing “No more juice in the morning
No more breakfast in bed
Do your own laundry
Because your mother
Your mother’s dead.”
We often wondered why we weren’t stars yet.
Words cannot describe the foul stench of this place
Which we had all grown totally accustomed to.
The sandbox in the kitchen was filled past overflowing
With catshit from Florentine and Oedipus,
The mutant 6-toed kittens Howard had gotten in February
To provide an air of normalcy and responsibility to his life.
The box had not been cleaned in months, and,
Cats being cats, Flo & Eddie made the entire house
Into a huge catbox.
There wasn’t a square inch of the carpet
That hadn’t been soaked in cat urine
Repeatedly.

Doing a shot of tequila, Howard pointed at the ceiling
Where a petrified lump of cat shit hung like a stalactite.
“I found that there one night when I came home,” Howard
explained.
“Etienne said he had nothing to do with it,
But I saw the guilt in his eyes.”
Etienne was a 19 year-old French Canadian kid who worked
With Howard at Lady Snow’s Smoke Menagerie,
Where freebase pipes were sold under the legal guise
Of being called “chemical extraction kits.”
Etienne had moved out of the house a couple weeks back
For reasons none of us could fathom,
Leaving Howard stuck with the full rent.
Silently drinking, we inwardly cursed that cat-hating bastard
Etienne,
Envisioning the squalid picture of the Canuck son-of-a-bitch
Flinging blameless kittens in the air as they
Projectile defecated in mewling feline terror.
“He must be punished!” Howard suddenly screamed.
“My babies SHALL have vengeance.”
Unfortunately, the SPCA office was closed,
It being past midnight and all,
So there was nothing for it but for Howard and I to drain the
Tequila,
Leap into my girlfriend’s car,
And drive to Etienne’s room in a seedy one-story building off
Sunset & Vermont with the purpose of robbing him blind.
The fact that Etienne was dealing dope and we were all out
Had nothing to do with the high moral tone of our quest
Which in our minds reached heights of a Biblical tale of justice
As we cruised down Sunset Blvd.
Singing the theme from “Mission Impossible”
At the top of our lungs.

As we parked around back of Etienne’s place,
The Chevette engine sounding like a DC-10,
Nerves suddenly set in. We couted windows ‘til we came
To the apartment we hoped was his.
“I think he’s at work until one,” said Howard.
“Geez, maybe this is kind of stupid.”
That was Howard all over—
Working others up into a vitriolic frenzy
And then getting all ambiguous on you at the moment of
Execution.
Luckily, I was made of sterner stuff, and
Wrapping a hammer in a towel,
Smashed the flimsy window, reached thru the broken panes to
Unlock it,
And hoisted myself in the building before my brain could register
How goddamn fucking noisy the whole procedure was.
Flipping on the lights, I saw I was bleeding from a cut I must
Have gotten reaching over the glass.
I hadn’t felt a thing.
As Howard gathered bags of marijuana and Etienne’s expensive
New scale
That he had stolen from Lady Snow’s,
I smeared my blood on the walls in a detached, tongue-in-cheek
Gesture,
Thinking,
“Man, this is so cool. My life has suddenly become a
Doors’ song.”
We walked out into the hallway,
Thanking Christ there was no one there,
Left by the back door
And drove west on Sunset
Doing the “Mission Impossible” reprise
And laughing hysterically as we gave ourselves
Criminal nicknames—
Howard was ‘Brains’
I was ‘Fingers’
Doug and Suzi were properly amazed by our return,
Having cheerfully expected us to be dead or arrested by now
So we all got high and fell asleep like happy puppies,
The pungent odor of ammonia wafting thru our nostrils
With the familiarity of an old friend.

A couple of days later I sold the scale to
An old workmate of mine at Hughes Helicopters,
An admin. assistant who quit to become a prostitute
Because, quite frankly, it was a step up for her,
Career-wise.
She gave me 50 quaaludes for the thing.
I split our take with Howard.
“I saw Etienne at work today,” he said, and related their
Conversation;
Etienne: Someone broke into my apartment—a deranged lunatic
who stole all my dope and smeared blood on the walls!
Howard: Jesus, that’s awful. What a sick sordid town this is.
You’re lucky you weren’t home when those fucking
maniacs were there.
Etienne: How do you know there were more than one?
Howard: Um, er, I dunno—I think I read someplace they always
work in groups.
Anyhow, Etienne ended up going back to Toronto.
Howard sold the ‘ludes for rent money,
Still ended up short, and,
After camping around town for a few weeks
With chance acquaintances he picked up in bars,
Had to fly back to his parents’ home in Boston
Where he was stuck until the following year.
I had always felt that dealing drugs was a path that would
Only lead me to
Ill-fortune and perdition.
Plus, who knows, some bastard might rob me.
So I was impelled by my personal convictions
To take all the drugs myself.
I spent a month in the bathtub
Reading Sanctuary and Black Spring.
It took me an inordinately long time
To finish a page for some
Inexplicable reason.
One night, as I was reaching the end of the stash,
My girlfriend came into the bathroom.
“John Lennon’s been shot,” she said.
“Wow…” I replied. “Did Yoko do it?”
But she had not, and,
Reviewing my life, I saw that
I had committed a petty, senseless, mean-spirited crime,
Spent a month in the bathtub stoned,
My skin wrinkling like a bad suit
As I read books I couldn’t have understood sober,
John Lennon died,
And to top it off,
Yoko Ono wasn’t even gong to the gas chamber.
And, in this moment,
The LA experience began to go sour on me. 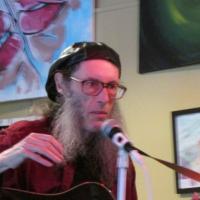 David Fewster's most recent book is A La Recherche Du Temps Perdu or, GET OFF MY LAWN: New Poems and Old Ephemera (Couth Buzzard Press, 2021). He is also the author of The Diary of Nanette Jenkins Volume 1 (a tale of Old Seattle), a collection of comic vignettes originally published in Andrei Codrescu's Exquisite Corpse from 1995-2008.His poetic peregrinations and musical meanderings can be viewed on the FolksingersInHell youtube channel. He endorses Guadalupe House aka The Tacoma Catholic Worker.